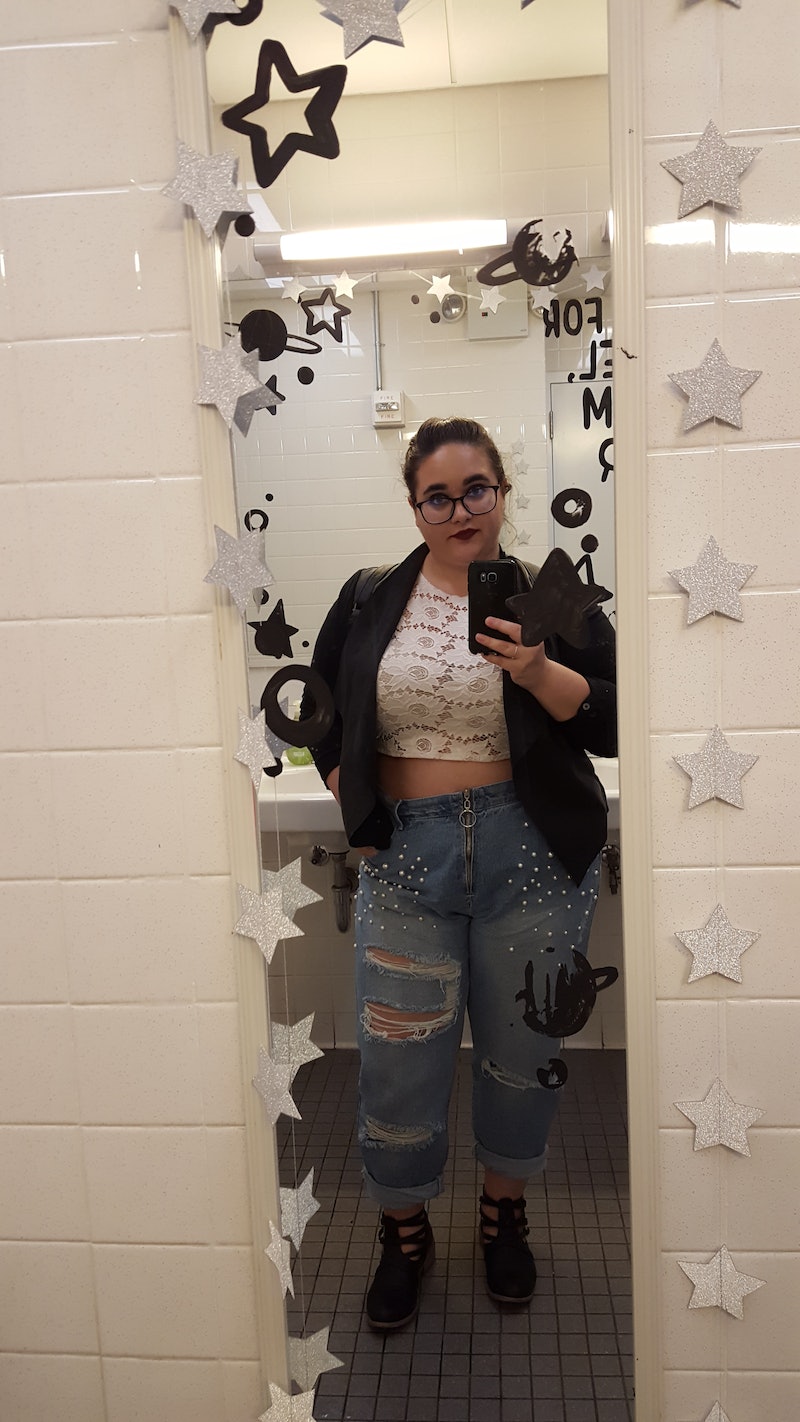 A few months ago, I was at my first meeting of a queer book club. There, I gathered with six other people to discuss Chloe Caldwell’s novel Women, a story about a woman exploring her first same-gender relationship. Although we were supposed to be focusing on the book itself, the conversation soon devolved out of the current prose and turned into a chat about our own love lives. While one woman confessed that she awkwardly walked away when someone she was on a first a date with asked to spend the night, another talked about a Tinder match who tried to make out with her before the night even began. "She was a hockey dyke," she told us.

Outside of the LGBTQ+ community, using a term like “hockey dyke” to describe someone may not make much sense. But to a group of mostly queer women, there was no confusion. For us, a hockey dyke is a woman with long hair who enjoys wearing athletic wear (think baseball caps, loose pants, team t-shirts, sneakers, etc.) She's typically known to be aggressive in a romantic setting — hence the premature make out.

Hockey dyke is just one of countless labels that we in the queer community use to describe gay women based on how they usually dress: high femme, stone butch, tomboi, queer punk, lipstick lesbian, and so on. Even looking around the room at the book club meeting that night, I could place each person in their own category based on their clothes: the soft butch, the androgynous boi, the granola tomboi, the soft femme, and the edgy tomboy femme. Then there was me, someone who's never been able to attach myself to a single queer style label. But I've always wondered if other people could.

The reason why I haven't been able to see myself as any one type of lesbian, fashion-wise, is not necessarily because I never wanted a label, but rather because my style has always been so versatile. For example, if I’m sitting at home, I'll likely be wearing a black shirt plastered with Albert Einstein’s face, or an old college T-shirt and high-waisted underwear. If I’m going out with friends, I’ll generally wear high-waisted jeans, a black or gray tank top, and a leather jacket. If I’m dressing up, I wear a black, see-through lace shawl over a short black dress. Then, there are days I feel a little more masculine, and wear one of my fun-printed button downs, with sailboats, cactuses, or flamingos, over high-waisted, ripped jeans. Or, on the days I feel feminine, I’ll wear a floor-length, flowy, floral cardigan.

Most of the time, I've got no issue embracing my ambiguous sense of style — it's a part of who I am. But, still, as a gay woman, there are times when I feel lost without being able to fit into one category. And it's likely because of the way queer communities embrace these names as terms of endearment.

“Labels are always a way of organizing and making sense of a population,” Robin Queen, PhD, linguist at the University of Michigan, who is an expert in sociolinguistics, language, and sexuality tells me. “They can be a way to mark in-group status. If you know the relevant terms, you are likely a part of the community.”

So shortly after my book club meeting, I decided I wanted to do an experiment to see if I could find out what category I fell into. My plan was to explore if other queer people — outside of my own immediate circle — could see something I didn’t.

I started off by taking a vague online quiz called What Type Of Lesbian Are You? from lesbianpride.org, a website that mostly seems to post funny (although slightly problematic) videos like “8 Ways To Tell If A Femme Woman Is A Lesbian." The quiz asked me questions like what's my favorite color, a description of my style, and my favorite sport. The final verdict based on my responses? Femme.

Despite having trouble placing myself into an exact category, I wasn't really shocked by the answer I got from the quiz. All of the other labels aside, if I were to be judged purely on a butch or femme dichotomy, I'm almost positive that no one would look at me and claim I’m butch. My hair is shoulder-length, and cut into layers that my hairstylist claims “nicely frame my face." Fifteen different necklaces hang from hooks on my bedroom wall. And while I rarely wear nail polish — due to my inability to keep the paint from chipping in the first five minutes — my toenails are currently painted a vivid, Barbie pink. I was curious to see if I could find a label that was a bit more specific.

My next step was to pose the question on a public Instagram story, accompanied with several photos of myself in various outfits, to get a some more input. And according to the eight queer women who responded, I’m a little bit of everything.

One person took three of the photos I posted and assigned me a different label for each. In her opinion, I’m a “punky chapstick lesbian” when I wear ripped jeans, a long black tank top, and a leather jacket. "A soft femme" if I have on a cropped sweater and chunky scarf, and "androgynous" when I wore my cactus-printed Madewell button down over ripped, high-waisted jeans. While an old college friend said I was a "lipstick femme with some chapstick days."

Looking at the same set of photos, another person declared me as a “soft femme” overall, while a colleague said that she felt like the “hard femme” label was the closest fit for me.

While I wasn't able to pin down one specific type of label through my tests, the feelings I've long had about my own fashion sense were proven true: I simply don't seem to fit into any one box. But I also learned along the way that many other queer women feel the same. The old college acquaintance who said I was a "lipstick femme with some chapstick days," later told me that she feels like the reverse: mostly chapstick with a few lipstick days thrown in. Through that small exchange, I'd like to think that we each had a quiet moment of appreciation in feeling seen.

Maybe I don't fit perfectly into a queer style box, but I still feel good sitting in my ambiguity. Because I know that whether I'm wearing a button down or a floral dress, I'm still a queer woman, and I've learned that my people will embrace me no matter what.