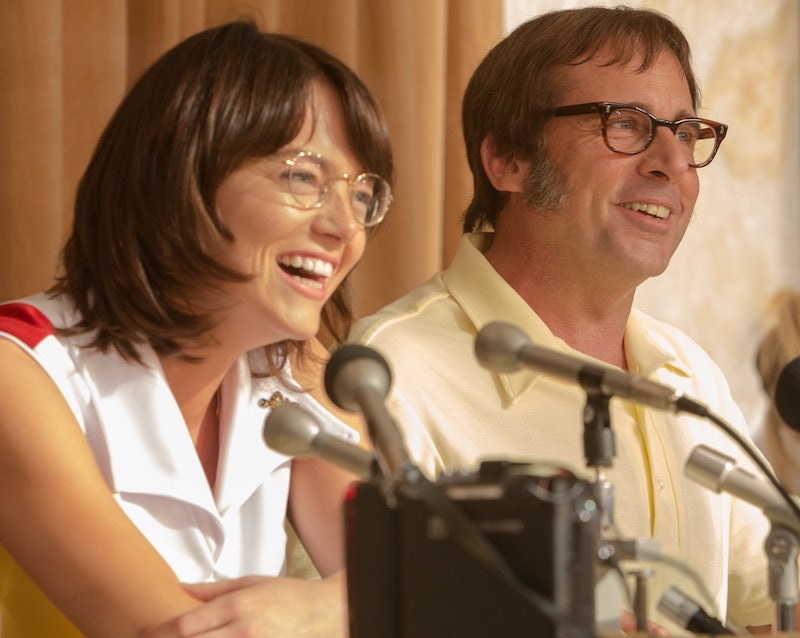 Please raise your hand if you've felt like you weren't as well-respected for certain endeavors because of your gender. Now take that hand, and give yourself a pat on the back — you've earned it. But you don't just get a back-pat, also mark you calendar, because Battle of the Sexes has a release date, and the girl power story couldn't come sooner — especially with all the anti-woman legislation in the works these days. The film, starring Emma Stone and Steve Carell, follows the now-iconic tennis match between Billie Jean King and Bobby Riggs and is set for release Sept. 22.

This dramedy directed by the husband-and-wife team behind Little Miss Sunshine, Jonathan Dayton and Valerie Faris, will dive into the on-and-off court drama that went into the 1973 showdown between King and Riggs. The film is set not to just detail the events behind the infamous tennis match, but will also follow the exploits of magazine founder Gladys Heldman, played by Sarah Silverman, who helped create a women's only tennis circuit when she realized that male and female tennis players weren't receiving equal pay. Basically, there's a lot going on, and a lot of women kicking butt — which is something I would personally like to see some more of in these trying times.

If you're not super familiar with the Billie Jean King story, here's a little background. In 1973, the then 55-year-old previous Wimbledon champion Bobby Riggs told Time, "Billie Jean King is one of the all time tennis greats...but she doesn't stand a chance against me, women's tennis is so far beneath men's tennis." He attempted to play against King — though she at first refused —so he went against Margaret Court and won the match. After his continued taunts against women's tennis post-win, King agreed to go against the chauvinist in a televised match.

The drama off the field was potent, but the drama on the field was even more so. King showed up carried on a litter by shirtless men while Riggs rolled in on a rickshaw pulled by half-clothed models. He gifted her a lollipop and she gave him a piglet. Though the match was at first a close one, King beat Riggs 6–4, 6–3, 6–3.

Indiewire reminds us that this match hosted at the Houston Astrodome, which was viewed by 90 million people, is viewed as a "watershed moment for women’s athletics." I think we can all agree that the sort of girl power that goes into that kind of moment is something we can all use right now. My body is so ready for this game, set, match.

More like this
These 25 International Horror Movies On Netflix Prove Fear Is A Universal Language
By Bustle Editors
What’s New On Netflix: Ana De Armas’ 'Blonde' & A Nick Kroll Special
By Arya Roshanian
12 ’90s Movie References You Missed In 'Do Revenge'
By Radhika Menon
Florence Pugh Reflected On Her ‘Don’t Worry Darling’ Experience On Opening Day
By Brad Witter
Get Even More From Bustle — Sign Up For The Newsletter