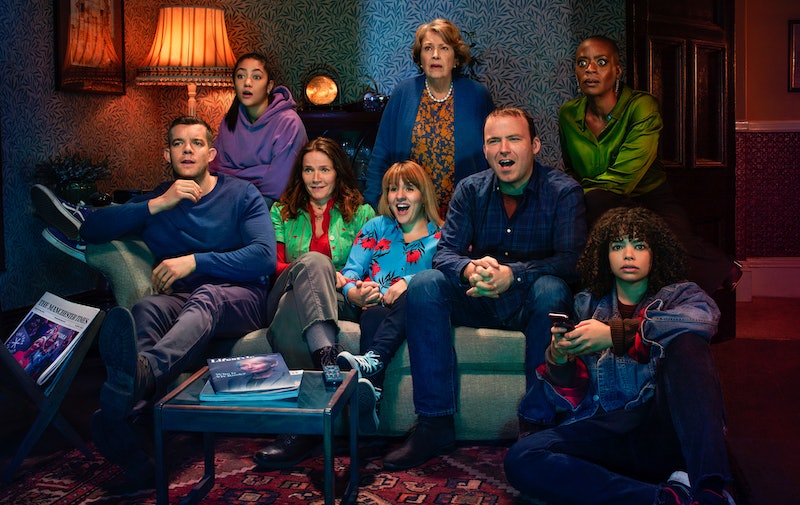 The upcoming BBC series Years and Years follows one family's survival over a 15-year period, in which Britain is rocked by unstable political, economic, and technological advances. The series stars the likes of Looking's Russell Tovey, Spectre actor Rory Kinnear, and is penned by the critically acclaimed writer, Russell T Davies. If you're intrigued to see what all the fuss is about, you're in luck, because BBC One have released the very first trailer for Years and Years, which gives viewers a first glimpse at the upcoming series.

According to an official statement sent to Bustle, Years and Years is coming to the BBC in May 2019, and will consist of six unique and ambitious episodes — each of which propel the audience a year or two ahead in time. The series stars Russell Tovey as Daniel, Rory Kinnear as Stephen, T’Nia Miller as Celeste, Ruth Madeley as Rosie, Jessica Hynes as Edith, and Anne Reid as Gran Muriel. And Nanny McPhee star, Emma Thompson, will take on the role of Vivienne Rook — an outspoken celebrity turned politician, whose divisive opinions split the nation. During her rise to power, Britain is led into an unknown future.

According to the BBC, the series tells the story of the Lyons family from Manchester, who's lives all converge during one crucial night in 2019. The story then moves into the future, and follows the Lyons family over the next 15 years.

A reported by the Radio Times, the upcoming BBC series will portray the near future in which Britain has left the EU, and America has become more isolationist. When discussing his motivations behind writing Years and Years, Davies revealed:

"I’ve wanted to write this for 20 years or so. And as the world accelerates like crazy around us, I realised I’d better get on with it! It’s a joy to be back home with Red (Production), and an honour to be on BBC One."

Nicola Shindler, the founder and executive producer of RED Production Company, has expressed her excitement at being able to work alongside the Queer as Folk writer. According to Attitude, Shindler said:

"I’m thrilled to have the opportunity to work with Russell again, and Years And Years is an incredibly exciting story to bring to the screen. The script is fantastic, and taps into the anxieties of the climate we are currently living in, speculating how the dynamics of cultural and political change affects our lives — and the lives of our families. What Russell does so expertly is navigate a potentially dark and fearful story into a compelling drama that is full of wit, warmth and hope, with family at the heart of the show. I can’t wait to get started."

Years and Years sounds as if it's going to perfectly reflect the constantly changing political and social climate in Britain, and I cannot wait for the new series to get underway on BBC One.