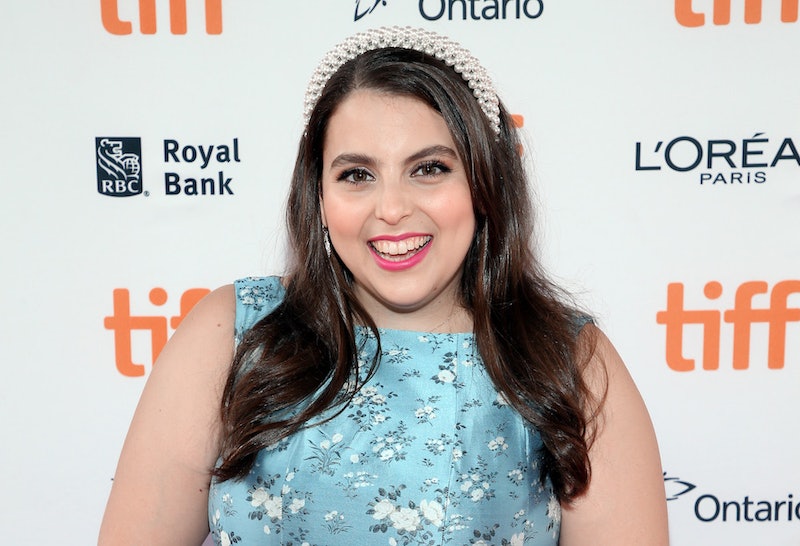 In a cover story for Teen Vogue’s October 2019 issue published on Oct. 1, Beanie Feldstein opened up about her girlfriend and how she’s made her look at love differently. In the interview, the Lady Bird actor talked about girlfriend Bonnie Chance Roberts, a producer she met on the set of the 2019 comedy How to Build a Girl. The film premiered at the Toronto International Film Festival on Sept. 7. Feldstein told Teen Vogue that while romance wasn’t something she “thought about or craved,” she ultimately had that moment of, “Whoa! Now I get it…. I get why people write songs” upon falling in love with Roberts.

Prior to meeting Roberts, Feldstein told Teen Vogue that she never considered herself the relationship type. In fact, her older brother, actor Jonah Hill, even coined her “the Dexter of relationships” due to the fact that she was the “most loving person in the literal world,” but that often didn’t translate into how she spoke of her partners. The comparison is a dig at her “icy” demeanor, one that references Michael C. Hall’s title character in the longrunning TV series Dexter, which followed a man who solved murders and just happened to commit them, too. The series ran on Showtime from 2006-2013.

In the interview, the Booksmart actor also revealed that when she fell in love with Roberts, her being a woman was an afterthought. “Not to sound flippant, but I was in love with her and all of her, and she’s a woman,” Feldstein said. “That’s not scaring me or deterring me. And it wasn’t just women in general; it was her specifically.”

On the topic of her sexuality, Feldstein told Teen Vogue she didn't feel confined to particular labels. Still, the actor said she understands the significance of declaring one’s identity, such was the case when Sam Smith announced they would be switching to “they/them” pronouns in a Sept. 13 Instagram post. “I was so moved by that,” Feldstein told the publication. “The more stories we have, both personal and fictionalized… it just adds to the effing conversation.”

As for Feldstein’s relationship with Roberts, a recent feature in Rolling Stone suggests the two have been together for a year now. In a June 19 interview with the publication, Feldstein simply said of her partner, “She’s magic.” Roberts said something similar about Feldstein on June 24, when she shared a birthday tribute to her partner on Instagram with a selfie and a caption that called Feldstein "an immeasurable force of magic."

Feldstein has similarly shared candid pictures with Roberts on social media. Most recently, she shared a July 8 Instagram of the two at Tanglewood Music Festival in Massachusetts captioned with lyrics to James Taylor’s “Something in the Way She Moves" and accompanied by sparkly emoji. Earlier this month, Feldstein and Roberts walked the red carpet together at the Toronto Film Festival at the premiere for How to Build a Girl.

With all of this in mind, perhaps it's time to retire Feldstein's "Dexter of relationships" nickname once and for all.

More like this
Who Is Bad Bunny Dating? Gabriela Berlingeri's Vocals Are Featured On His Song "En Casita"
By Radhika Menon
Dane Cook Is Engaged To Kelsi Taylor After Dating For 5 Years
By Danielle Jackson and Radhika Menon
Nicola Walker’s IRL Husband Is No Stranger To TV Screens
By Darshita Goyal
Ellen DeGeneres, James Tupper, & More Celebs React To Anne Heche’s Death
By Brad Witter
Get Even More From Bustle — Sign Up For The Newsletter