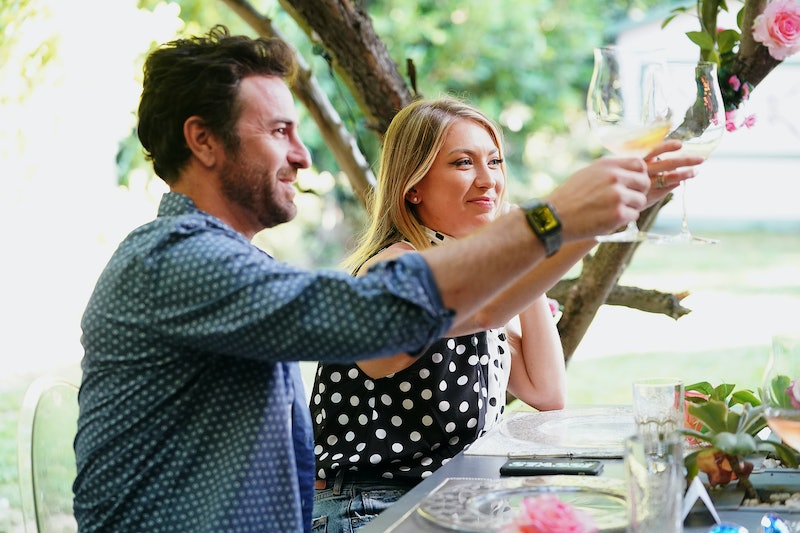 Nearly a year after news of their engagement broke, we finally got to see Beau propose to Stassi on Vanderpump Rules, and it couldn't have been more true to who they are as a couple. As we saw in (and leading up to) the show's April 27 episode, Beau planned the big moment with the utmost precision and only Stassi's interests in mind: he popped the question at the Hollywood Forever Cemetery, luring her there under the guise of shopping for mausoleums for them to be buried in together when they die. It would be incredibly weird for almost anyone else, but this is Stassi, whose fascination with death and murder is only outweighed by her love of ranch (and maybe Beau). Browsing for coffins is just another Tuesday for her.

Once at the cemetery, Beau arranged for his friend to sneakily hide the ring in a weird mushroom-shaped locket box thing, right under a bench where he and Stassi were sitting. He called attention to the box, wondering what it could be, then leaned over to pick it up and spun around on one knee. Stassi's reaction was one of total surprise (and profanity). She quickly said yes — but not before getting a good look at her new ring, a Clark family heirloom. Their joy was so palpable that not even a nasty text from Carter could bring them down.

After a Lisa Vanderpump-hosted engagement party (sans Kristen), Stassi woke up the next morning and immediately started thinking of wedding ideas, accepting her fate as a "bride demon." (We send our condolences to Beau). She instantly decided upon an intimate ceremony in Italy, which is now set to happen in October — if the coronavirus pandemic doesn't ruin their plans.

While appearing on Watch What Happens Live in March, Stassi said they haven't yet postponed their wedding in Rome, but "who the heck knows?" They did, however, already buy their flights because "they're really cheap right now." At least they'll have more money for the wedding budget if they have to cancel and can't get their deposit back.