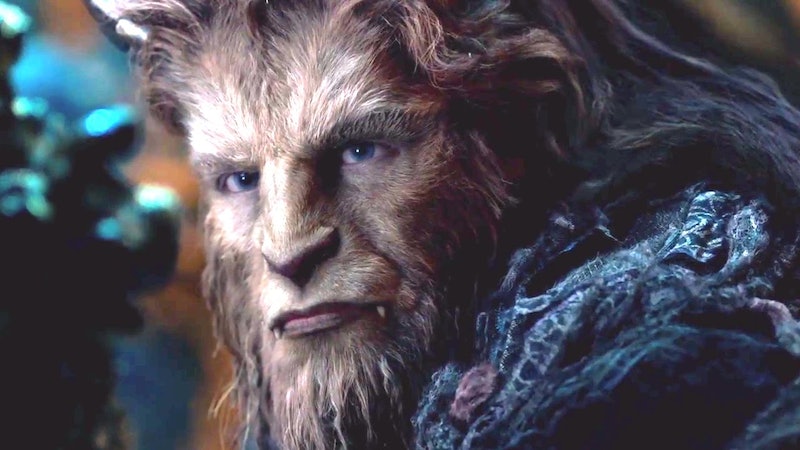 Disney's live-action remake of Beauty and the Beast dominated the box office this past weekend, and with good reason. The film is visually stunning, the musical numbers are glorious, and Emma Watson's performance as Belle is sensational. But Watson wasn't the only one delivering in the acting department, the entire cast was on point, in my opinion. Even though they were CGI, you really felt for Mrs. Potts, Cogsworth, and Lumiere. Oh, and the chemistry between Watson and Dan Stevens, who played the Beast, was legit. The cast and filmmakers really captured the unlikely romance from the original tale. Stevens recently spoke about transforming into the Beast and the technical effort it took, and to be honest, it sounds like a big pain in the behind.

"Ultimately we went for a fusion of technologies," Stevens told People, "traditional motion capture and puppeteering of a big muscle suit on stilts. I was inside this 40-pound thing covered in gray lycra and marker dots."

I don't know about you, but having to wear a 40-pound muscle suit while balancing on stilts sounds unpleasant, to say the least. I can barely manage to carry a bag of groceries without dropping my cell phone, so I can't even imagine the dedication it would take to transform into a giant beast.

According to People, Stevens had to film his scenes multiple times so that the visual-effects teams could properly turn him into the Beast. First he wore the body suit and stilts on set so that the size and enlarged movements of the character could be filmed. He and Watson would then go into a studio to shoot scenes so that his facial movements could be captured.

Of the filming process, Stevens said,

"Every couple of weeks I would go into a special booth and my face would be sprayed with about 10,000 UV dots and I would sit in what I used to call the Tron cage. Anything I’d been doing in the previous two weeks in the scenes, whether it was eating, sleeping, roaring, waltzing, I did it again with my face, with Emma sitting on the other side of the cage and we would capture the Beast’s face."

So why did they go to such great lengths? As Stevens explains, it was so that the audience could see Beast's human qualities.

"It was very important for Bill [Condon] and for me in telling the story, and in portraying what’s essentially a romantic lead character, to have the sensitivity in that close-up to preserve the eyes which are the last human element of the Beast. It’s never really been used this way before. It felt very pioneering."

Though it seems like a giant pain, the effort put into showcasing the Beast's human qualities definitely paid off.