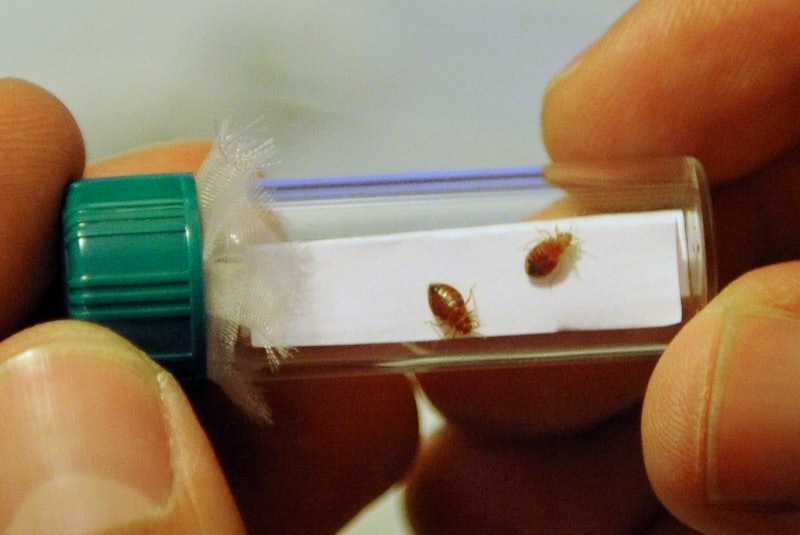 If the thought of a bedbug infestation doesn't terrify you, you may want to rethink that. Bedbugs cause itchy, painful welts and are notoriously hard to get rid of — in some cases, you'll have to bring in a professional exterminator, which can run hundreds or even thousands of dollars. The worst thing is that bedbugs can come back even after a professional extermination. An infestation can even lead to serious psychological issues, so you will want to avoid them like the literal plague.

Given the physical, emotional and financial toll bedbugs bring, it makes sense to avoid them at all possible costs. There's a ton of research about how to spot bedbugs, like checking secondhand furniture for bloodstains or bedbugs before bringing it home or inspecting a new hotel room before settling in. But why are bedbugs attracted to you in the first place? A new study has found a slightly gross, terrifying answer: they love the smell of dirty laundry.

Researchers from the University of Sheffield set out to determine what attracts bedbugs to people. Bedbugs love humans because they feed on the blood of mammals, so it makes sense they'd be attracted to human body odor as well. The study authors set up a fake bedroom with laundry bags. One bag was filled with clean clothing, while the other was filled with dirty shirts and socks. Then, they released a cage full of bedbugs and gave them four days to check everything out. Their findings? The bugs were twice as likely to burrow in the bags with dirty clothes.

Listen: These bugs are like tiny, horrible hitchhikers. They can attach themselves to pretty much anything and can hide under wallpaper, along mattress seams, and even in baseboard cracks. Fully grown bedbugs are about the size of an apple seed, so these bugs have options when they're figuring out where to hide. Check out this less-than-encouraging tip from the Environmental Protection Agency: "If a crack will hold a credit card, it could hide a bed bug."

Here's the scary thing: Your clothes don't have to sit for weeks for bedbugs to find them and make themselves comfortable. The scientists used clothing that had only been worn for a few hours, and the bedbugs were all about it. So what should you do? For starters, be careful when you're staying at a hotel or an unfamiliar place. Bedbugs can sneak into your luggage and find your laundry bag, especially if you leave your suitcase on the ground or bed. Experts recommend keeping your luggage on luggage racks when traveling, which makes it harder for bedbugs to reach.

Also, upping your laundry game definitely can't hurt. Researchers found clothes only needed to be worn for a short period of time for bedbugs to take notice because your clothing starts to smell like you pretty quickly. Still, the more frequently you do laundry, the better off you are when it comes to bedbugs.

So how often should you be taking trips to the laundromat? According to the American Cleaning Institute, your bed sheets should be washed every two weeks, while bras can only be worn two or three times before they need a wash. Your towels should be laundered after three to five days of use. (Based on these recommendations, I'm in a bit of trouble.)

Biologists told Gizmodo to remember the study isn't foolproof, since it was an experiment and not real life, but there are still takeaways for anyone trying to avoid a bedbug takeover. You may not be able to prevent them from ruining your life just by doing a load of laundry, but it definitely won't hurt.

More like this
Is The Insta-Famous Always Pan Actually Worth It?
By Jessica Goodman
The Cabincore Home Decor Trend, Explained
By Jessica Goodman
6 Abortion Advocates To Follow On TikTok
By Sara Youngblood Gregory
The Guide To “Witches Stairs” & Why They’re Actually Great For Small Spaces
By Emma Garza
Get Even More From Bustle — Sign Up For The Newsletter