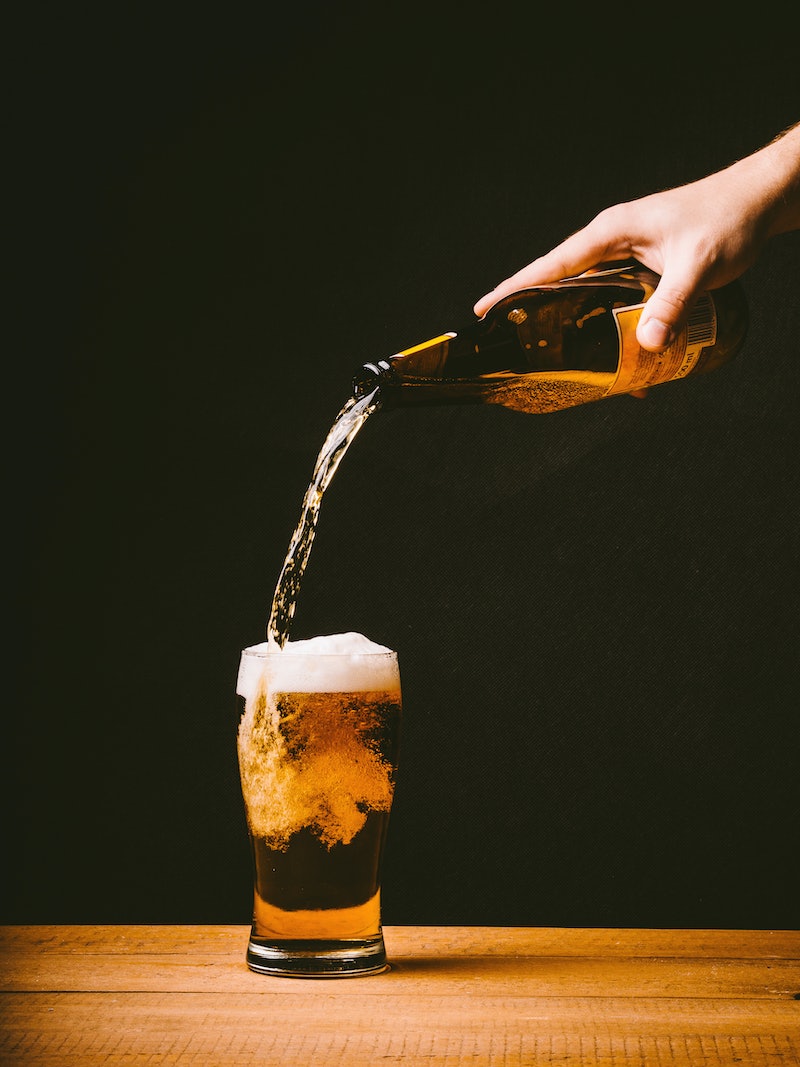 Ever wish you could skip the workout and go directly to happy hour? Well, thanks to two Berlin-based yoga instructors, you can now exercise and have that stress-relieving after work you crave drink at the same time. Introducing Beer Yoga, or, rather, BierYoga as it is known in Germany. In what appears to be the most fun hour of multitasking imaginable, Beer Yoga helps you find your “Om” with a Vinyasa-style class, all while cradling a crisp bottle of Hefeweizen. (Bustle has reached out to BierYoga for comment.)

Certified Yoga instructors Emily and Jhula, the founders and driving force behind the workout phenomenon, are not around kidding when it comes to the health benefits of this interesting combination. “BeerYoga is the marriage of two great loves — beer and yoga. Both are centuries-old therapies for body, mind and soul," the website states. "The joy of drinking beer and the mindfulness of yoga compliment each other, and make for an energizing experience.”

If you think beer yoga is just about getting tipsy in stretch pants, though, know that the class is not quite as chill as you might think. For maximum effect, the beer is incorporated in classic yoga routines — so, yes, you will be balancing a glass bottle on your head while holding Tree Pose.

"BeerYoga is fun but it’s no joke – we take the philosophies of yoga and pair it with the pleasure of beer-drinking to reach your highest level of consciousness," the Beer Yoga website states. Emily and Jhula encourage everyone to give the class a try, whether they're die-hard yogis, beer snobs, or just plain curious. According to Exberliner, admission to class will run you just five Euros, while the two bottles of beer needed for the poses are an additional six Euros. The classes are hosted all over Berlin, in nightclubs, bars, festivals, and outdoors so yogis can soak in more than just booze.

This is by no means the first time that beer and yoga have been adventurously paired up. Jhula first witnessed the combination while attending Burning Man, though she didn't participate in the beer-centric flow class being offered at the time. Back in her native Germany, she began attempting to work beer into her normal routine. “Basically, I played around with it in my room with a Radler [half beer, half lemonade or soda],” Jhula explained to Vice's Diana Hubbell. “I took standard vinyasa sequences, which most people have done a bunch of times, and tried to figure out everywhere I could work beer in there.”

The workout phenom has only grown in popularity over the course of 2016, and is slowly expanding across the globe. The two instructors are bringing their beer yoga practice to Australia, touring Sydney and Melbourne during the months of January and February of 2017. If beer can truly help you strengthen, lengthen, and breath — maybe a hoppy brew is the secret to a relaxing yoga practice.