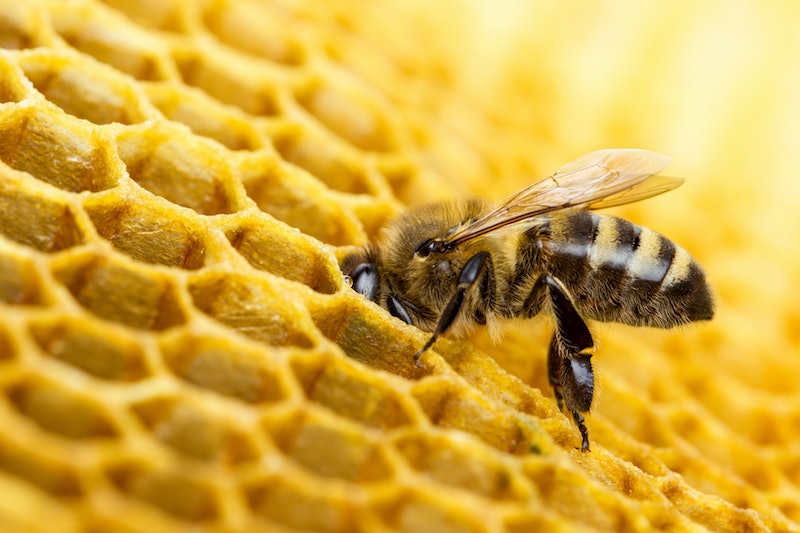 Get ready for some bee-autiful news, friends: Bees are even more intelligent than we thought. We already knew bees could be trained and that they can count up to five, but now animal cognition researchers out of several universities have published findings in a new study that indicate even untrained bees can understand what zero is. If this doesn't seem like a big deal to you, rest assure — it is. As Smithsonian Magazine put it, this ability puts bees in an "'elite club' that consists of species we generally consider quite intelligent, including primates, dolphins and parrots." Basically, bees are hella smart, and that's a big deal.

The new study was published June 8 in the journal Science, and is the culmination of research from scientists out of RMIT University of Melbourne, Monash University in Clayton, Australia, and Toulouse University in France, Smithsonian reported. Despite the fact that bees have 100,000 times fewer neurons than humans, researchers suspected they may have the cognitive ability to grasp zero, according to a press release about the study.

Adrian Dyer, a coauthor on the study, told Smithsonian, "My lab was starting to accumulate some evidence that bees could do some advanced cognitive tasks, such as tool use, playing 'soccer' — manipulating a ball to get a reward — and learning to encode information in human faces. We were aware that this animal model was very capable of learning things [...] it was the right time to formalize an experiment to see if the bee brain could process the concept of zero."

To put this theory to the test, Dyer and his fellow researchers started by training bees to drink sweetened water from a setup where platforms were paired with images, according to the press release. If the bees correctly picked the image with the fewest number of elements, they were rewarded with the sugar water. Once they had that down, the researchers began showing them two images at a time, one totally blank, and one with one or more dots.

And their bees learned to pick the blank image! According to Vox, the bees chose the blank image "[t]o a degree much greater than chance ... 60 to 70 percent of the time. And they were significantly better at discriminating a large number, like six, from zero, than they were in discriminating one from zero." Dyer told Vox that the trouble distinguishing smaller numbers from zero "is actually consistent with the idea that zero is a hard thing for the brain to represent."

Being able to consistently choose the blank image shows that bees "had extrapolated their understanding of 'less than' ... as applied to whole numbers ... to zero, which they assigned the lowest rank of all," according to the study report.

For folks who aren't super hyped about bees, this may not seem groundbreaking, but seriously, it is groundbreaking. As the researchers behind the study report put it, "Zero was a major mathematical breakthrough for humans." Smithsonian asserted that discovering zero allowed humans to develop algebra, calculus and Cartesian coordinates. And Dyer told Smithsonian that some ancient human cultures "appear not to ever have used the concept of zero."

"[B]ut as we look across animal species," Dyer added, "we see that their brains are capable of processing this information."

The study does have some naysayers, like bee cognition expert Clint Perry, a research fellow at the Queen Mary University of London. He told Smithsonian that it was possible "the bees were using 'reward history' to solve the task," which means the bees "were truly just learning that the blank panel earned then a reward 100 percent of the time, the one-shape panel 80 percent of the time, and so on. In other words, they were simply playing the best odds they could with the panels they were shown, without necessarily understanding the concept."

Perry added that he does see how bees being able to understand zero "could give an adaptive advantage for survival" and is therefore possible, but "these experiments should be repeated and the interpretation verified," he said.

So stay buzzing, y'all. It looks like our foray into bees' mathematical skills is far from over.