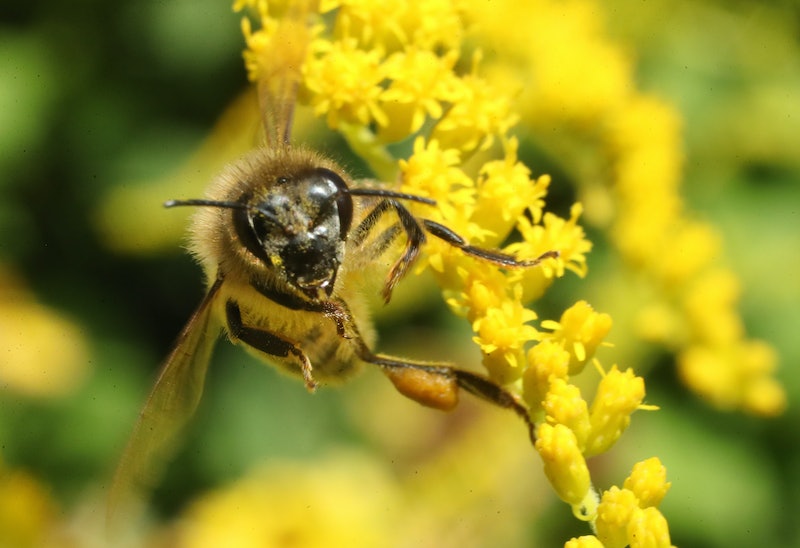 The world’s top weed killer might be a cause of the world's mass bee die-off, according to new research from the University of Texas at Austin. According to the new study, bees deaths are linked to glyphosate, a chemical found in common weed killers. The chemical does damage to bees’ gut microbiomes, which means that bees can’t fight off bacteria and pathogens, leaving them vulnerable to infections and death. Mass bee death has been a major environmental issue in the past few years, as the absence of bees interrupts their crucial ecological role as crop pollinators.

Published ahead of print in the journal Proceedings of the National Academy of Sciences (PNAS), the study suggests that glyphosate was previously thought to be safe for animals, but new evidence suggests that it disrupts the guts of honey bees, and may affect gut health for other animals as well. Newsweek reports that glyphosate seems to destroy the good bacteria in the bee microbiome. The weed killer works by targeting an enzyme found in plants and some microorganisms, but researchers say that it may also interfere with bees’ gut health. Newsweek further notes that the study’s authors are pushing for public policy that would limit how glyphosate is used — and that plants from which bees collect nectar from should not be treated with it.

Bayer, the company that makes Roundup, a common weed killer that uses glyphosate, contests the findings of this study, issuing a statement saying that “No large-scale study has ever found a link between glyphosate and honey bee death issues.” Furthermore, Bayer states that, "The paper does not provide any evidence that the purported effects could have a negative impact on bee health under realistic field conditions." NPR notes that Bayer purchased the company that developed Roundup, agriculture giant Monsanto, in June 2018.

According to NPR, researchers tested “hundreds of adult worker [honey] bees from a single hive,” and treated them with varying amounts of glyphosate. Results showed that bee microbiome disruptions were evident. Per a recent statement issued by the University of Texas at Austin, “Native bumble bees have microbiomes similar to honey bees, so … it’s likely that they would be affected by glyphosate in a similar way.”

Study author Erick Motta told Newsweek that “Honey bees rely on these bacteria for food processing, regulation of host immune system, and protection against pathogens … changes in this microbial community may favor the spread of opportunistic bacteria, usually found at very low abundances in the bee gut. This spread can result in disease and bee death, based on our experiments.”

According to NPR, researchers suggest that these findings indicate that glyphosate may be contributing to colony collapse disorder, a major problem that has been harming various bee species worldwide for over a decade, and resulting in dangerously dwindling pollinator populations. Per the Environmental Protection Agency (EPA), colony collapse disorder happens when the majority of bees in a colony disappear, leaving the queen and young bees behind, and ultimately leading to the total collapse of the hive.

NPR further reports that the study’s authors are urging farmers, landscapers, and gardeners of all kinds to stop spraying glyphosate-based herbicides on plants — especially flowering varieties that are pollinated by bees.