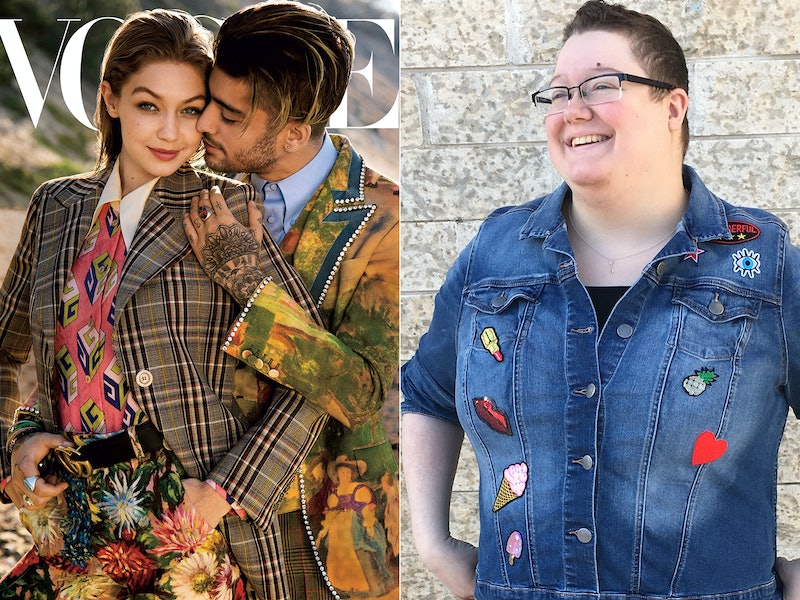 Vogue's August 2017 cover featuring Gigi Hadid and Zayn Malik hit the virtual newsstands on July 13. For me, the story accompanying the cover got off to an inauspicious start, with the writer incorrectly conflating sex and gender. The piece goes on to posit that cisgender celebs Hadid and Malik, who share clothes, are the embodiment of a mysterious generation of apathetic youth that is apparently so unbothered by that silly gender thing, its members are finally free to wear whatever they want.

"This new blasé attitude toward gender codes marks a radical break," Vogue says, describing Hadid and Malik's matching tracksuits, and Hadid's younger brother's lace top. "For these millennials, at least, descriptives like boy or girl rank pretty low on the list of important qualities — and the way they dress reflects that."

Unlike Hadid and Malik, I am the person Vogue is actually talking about —someone who is supposed to "breezily crisscross the XX/XY divide," whatever that means. In reality, I'm transgender, someone who wears clothes made for all genders and sexes, and a member of the generation that, contrary to the mag's assertion, is actually the most gender-diverse (and gender-aware) in history.

I came out as transgender at age 19, at first identifying as bigender, then genderfluid, and finally settling on transmasculine, aka a person who was assigned female at birth, but who identifies strongly with masculinity. I prefer being called "sir" to being called "miss" or "ma'am." I prefer for people to assume my pronouns are "he/him" than "she/her."

I also prefer wearing dresses, something I only recently became comfortable with. The ability to "breezily" crossdress, I have found, belongs solely to cisgender people. Us trans folks don't "breezily" do anything when it comes to how we present ourselves. A cis man borrowing his girlfriend's jacket or eyeliner is quirky and so unique and trendy; a trans man doing the same risks undermining the credibility of his identity with both cis people and his fellow trans folks. Is he really a man if he hasn't cast all makeup into the fire? people ask. Is he really a man if he likes the feel of a skirt swishing around his knees?

For trans people, choosing what to wear can seem like taking part in an unwinnable game show, where every answer given and every choice made is wrong.

As a teen who, pre-coming out, spent much of their time cultivating an identity as a "tomboy," I stayed away from dresses, and preferred shopping in the men's section, because I had an appearance to keep up. Buying a dress was a betrayal. I never bought an item of clothing without scrutinizing it and wondering if it would somehow give me away as a fraud, even if I wasn't one.

That's part of why I'm such a big fan of degendering items of clothing. Getting to the point where people of all genders and sexes can wear whatever they want without shame is the ultimate goal. Hadid and Malik have an excellent outlook on decoupling gender from clothing — "It’s just about, Do the clothes feel right on you?" Hadid says — but that doesn't make them genderfluid, as the article suggests. They don't have a non-cis gender; they dress androgynously. They have a style, not an identity.

And uplifting them as genderfluid icons while simultaneously claiming young folks these days just don't care about gender isn't just wrong, it's dangerous. It's a perfect storm of erasure. Vogue labels cisgender celebs as icons of the trans community, all the while touting the conclusion many people use to try to discredit trans folks: That gender isn't important — or doesn't exist at all.

Vogue did bring into the piece agender artist Tyler Ford, who discussed discovering a nonbinary identity, saying, "I am who I am, and I just want to exist as myself." The fact that someone like Ford was eclipsed by a cisgender couple for a cover story about gender identity and bucking traditional gender-dictated style rules is depressingly telling.

There is no epidemic of gender apathy sweeping the younger generations of today. Vogue says we are moving toward having "attitude, not gender, as the all-important marker of a human being." Maybe we should try telling the one in 137 modern teens who are trans that their identities matter, instead of giving cover and feature space to cis people who say gender is no big deal.

Because let's be real: The only people who think gender is unimportant are the ones who have never had to question theirs.

UPDATE: In a statement to Bustle, a Vogue spokeswoman said, “The story was intended to highlight the impact the gender-fluid, non-binary communities have had on fashion and culture. We are very sorry the story did not correctly reflect that spirit – we missed the mark. We do look forward to continuing the conversation with greater sensitivity."