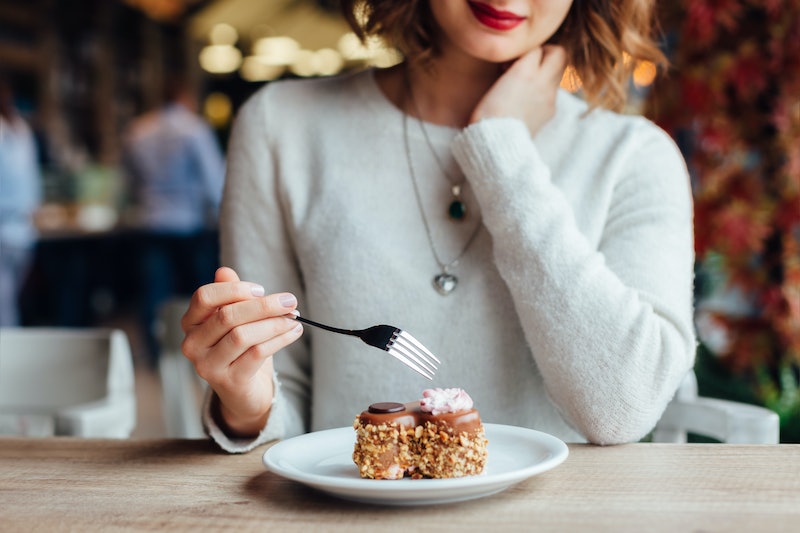 If you've ever made some extremely impulsive decisions in the food aisle when hungry, you're not alone. New research published in Psychonomic Bulletin & Review by researchers at the University of Dundee has found that hunger changes your decision-making in real and concrete ways. And, interestingly, the researchers found that these changes doesn't just apply to our decisions around food.

Dr. Benjamin Vincent, a lecturer at the School of Psychology, and his former student and co-author Jordan Skrynka, wanted to investigate how hunger affects impatience, so they recruited 50 participants for a two-part experiment based on the format of a famous test known as the "marshmallow test". The format involves asking participants whether they want a small reward now, or a more substantial reward later in the future, if they're willing to wait. For the new study, the rewards on offer were either food, money, or music downloads.

The marshmallow test format has been used many times in psychology research to test willpower and the power of instant gratification, most famously on children in the 1960s. However, Dr. Vincent and Skrynka's experiment had a difference. "We ran this test past people in two different situations: once when they came into the lab as normal, having eaten breakfast, and the next time after not eaten breakfast," Dr. Vincent tells Bustle. "We measured how hungry they were using a questionnaire and tested their blood sugar."

Predictably, when people were hungry, they wanted food now rather than food later, even if the reward associated with getting food later was better in some way. "People were much more focused on immediate food rewards when they were hungry. That's not a surprising finding," Dr. Vincent tells Bustle. "However, the thing that really stood out to us was that people become much more impulsive for non-food rewards. That was unexpected because these non-food rewards couldn't do anything to alleviate hunger, yet people still became impulsive for them." In other words, hungry people still wanted immediate rewards, even if what they were being offered wasn't food at all.

It's an intriguing insight into how hunger affects our decision-making, and it's not clear why the participants were so driven to get immediate rewards when they hadn't had breakfast. "One idea is that hunger might put you into a scarcity mindset," Dr. Vincent says. "Rather than becoming highly focused on food, maybe your brain thinks that you're in a resource-scarce situation and you should just gather as much stuff as possible."

It may also provide some insight on the decision-making of people who are trapped in cycles of hunger and food insecurity — not having access to food could have a negative impact on decision-making abilities. However, Dr. Vincent warns against making generalizations. "Some folk on the right might attribute people being poor to the consequence of short-term decisions that they make, but a more valid and realistic view is that people actually just adapt to the environment that they're in." Being impulsive, he says, may just be the best option if you're regularly not sure where your next meal's coming from.

"If you're in a stable environment with plenty of resources, where people keep their promises, you can easily afford to wait for larger rewards in the future," he tells Bustle. "But that's not true if you're in a resource-scarce situation. It's adaptive and rational to take the immediate rewards."

Willpower and decision-making are very complex areas of psychology, and many different factors affect them. For instance, studies of the "marshmallow test" format have revealed that results are different depending on peoples' beliefs about their own willpower. If participants think it's an exhaustible resource, they'll feel unable to resist temptations and easy rewards after a short while because they'll think their "store" has run low, but if they think their willpower is actually infinite, they might make different long-term decisions. Now it appears that hunger can affect wide ranges of decision-making, beyond what we previously knew.

There's a lot of work left to do to see how factors like hunger might affect real decision-making situations. This study only involved a very small range of rewards, and was conducted with a small sample size in a lab; Dr. Vincent says the next step is to take it into the real world, and see how it might apply to a wider range of commodities and choices. However, it does mean you have a very good reason to stop at the snack counter before making big decisions that involve waiting periods: your brain might not want to delay instant gratification for longer-term rewards when it's hungry.