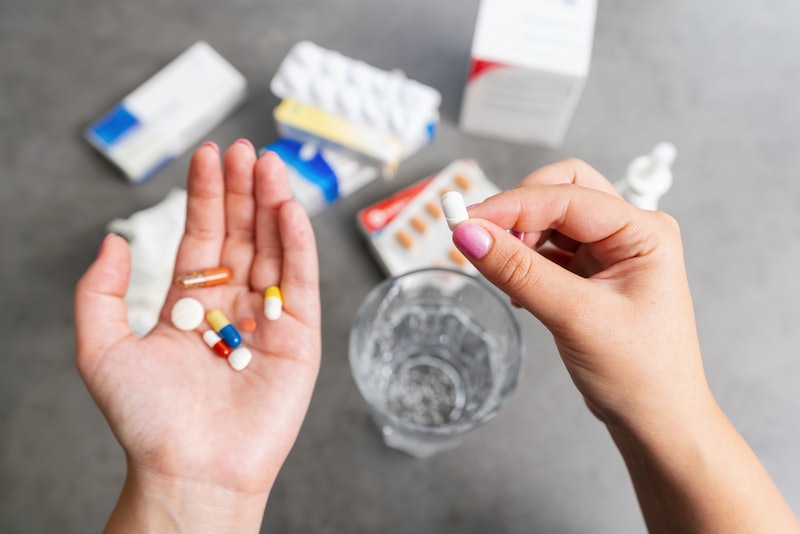 If you follow a vegan diet, and you feel particularly rundown during your period, your body could be lacking some key nutrients. Keri Gans, a registered dietician and nutritionist, tells Bustle that people who follow vegan diets, and experience heavy flows during their periods, are at greater risk for low iron levels. Because of this, the most important vitamin if you're vegan and on your period is one that contains iron, Gans says. If you suspect your iron levels are low, talk to your doctor or nutritionist about a daily iron supplement.

Iron deficiency is among the most common nutrient deficiencies in the world, and some people are at a greater risk than others. A 2005 study published in the Australian journal Public Health Nutrition found that non-meat eaters tend to have more menstrual problems and lower iron levels that those who eat meat. And having low iron levels can lead to fatigue and even iron-deficiency anemia.

"Iron is an essential mineral found in red meat and certain fruits and vegetables. In the body, iron is needed to form myoglobin, a protein in muscle cells, and it is essential for certain enzymes that drive the body's chemical reactions," Harvard Medical School reported. "In the bone marrow, iron is used to make hemoglobin, the oxygen-carrying chemical inside the body's red blood cells. If iron levels fall too low, it causes iron deficiency anemia. When this happens, red blood cells become smaller than normal and contain less hemoglobin."

While anyone can be at risk for iron deficiency, a 2004 German study published in the journal Annals of Nutrition and Metabolism, reported that 40% of young vegan women are iron deficient. Even if you're not vegan, people who experience heavy-flow periods, pregnant people, athletes, and recent blood donors are also at risk for low iron levels.

Symptoms of iron deficiency, according to Harvard Medical School, include fatigue, breathlessness, and a decreased ability to exercise. You may also be unusually pale. If you've been iron deficient for a prolonged period of time you could have trouble swallowing and develop brittle fingernails.

Gans recommends taking a daily supplement like MegaFood Blood Builder that contains iron, folic acid, B12, and vitamin C. According to a small University of Maryland School of Medicine clinical study published in the Journal of the American College of Nutrition, this supplement didn't cause gastrointestinal distress among study participants.

The good news is that after six months of supplementation your body's iron levels should return to normal, Harvard Medical School noted. If you're not sue whether or not your iron levels are too low, see your doctor for a test and recommended treatment plan.