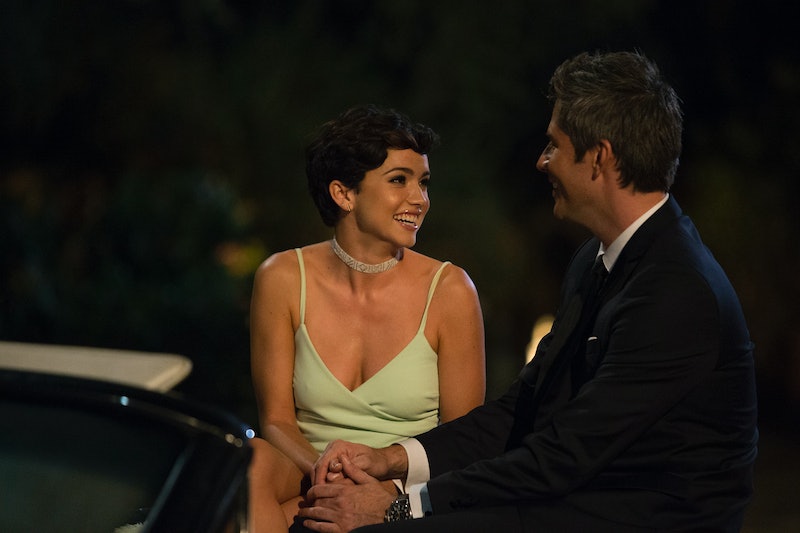 As a Bachelor fan, it's easy to get caught up in the love stories and drama, but one of the best parts of watching is the fact that, as a show, it doesn't take itself too seriously — and sometimes, neither do the contestants. Bekah isn't afraid to poke fun at Bachelor Arie, just like most fans of the shows love to do, so hopefully Arie Luyendyk isn't bothered by her sense of humor.

On Monday night's premiere, Bekah was one of those contestants who immediately caught fans' attention as soon as she was introduced. At just 22 years old, this nanny is a lot younger than Arie, and, from the start, it seemed like she liked to keep things lighthearted. She arrived in an awesome classic car, and immediately liked Arie from the moment they met (and it seemed the feeling was mutual). She made a slight joke about their age differences, too. "I may be young but I can still appreciate something classic," she said. Though she was referring to the car she showed up in, it's also a note that she can appreciate Arie, even if he's a bit older than your usual Bachelor.

Over the course of the evening, as she had time to hang out at the cocktail party with the other women and got her few minutes to chat with Arie, it became very clear that she's well aware that being on The Bachelor is a pretty wacky situation to be in.

Some of the other women talked about how weird the situation was too during the cocktail party, like how ridiculous the idea of waving to Arie while he was technically on a date with another girl was. But when it came to Bekah, just watching her facial expressions was enough to know that this is something she's definitely getting a kick out of. She seemed to notice right away that Chelsea was trying to position herself as this season's villain, and instantly mocked how she was acting to the other women. In fact, her Chelsea impression was surprisingly good.

And when she and Arie got the chance to talk, she pointed out how weird it was to be sitting in a classic car with a guy she just met, trying to figure out if he liked her or not. She also joked about Arie's answer to her question about what makes him excited (which was "excitement" lol). "Excitement? makes you excited to be alive?" she said with a laugh. Arie didn't seem to pick up her joke, but the audience did.

She seemed to be thoroughly enjoying her time on The Bachelor so far, and if this is what fans can expect from her on the show this season, it looks like she's going to be so easy to relate to and a lot of fun to watch. (If she doesn't win, she'd be a great Bachelor In Paradise Wells-like narrator.)

Everything Bekah said about The Bachelor is true, especially every time she seemed to acknowledge how incredibly strange the evening was. It is strange — meeting a man for the first time, knowing that 28 other women are also vying for his heart and trying to make an impression on him before you settle in for the weeks ahead, finding out if you want to spend the rest of your life with him. It's completely unlike any other way people typically meet and find their spouse, so good for Bekah for being able to keep a level head about the whole thing.

Seeing her attitude toward this whole experience makes it so easy for fans to like her. She might be young, but she's already taking the right approach toward a totally unusual method to finding love. And knowing how emotionally and mentally taxing this process has been on other contestants, that might just be the key to surviving it with your sense of humor in tact.