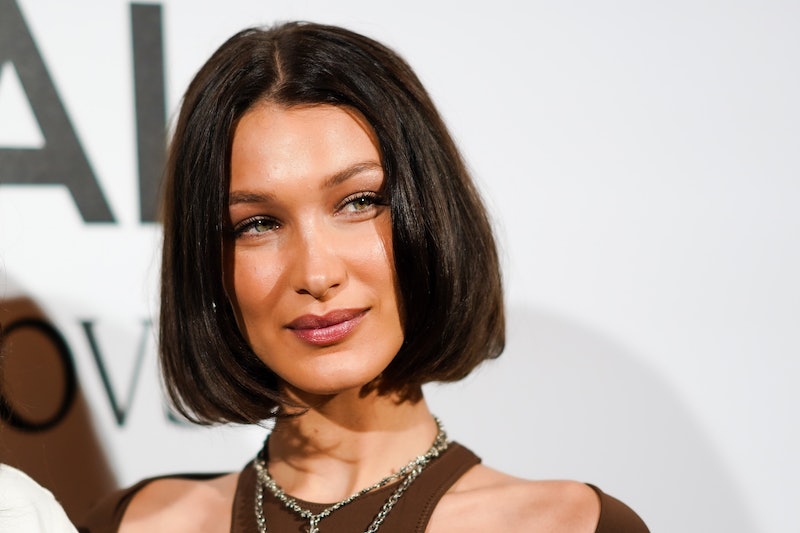 As a world-famous lingerie model, it might seem like Bella Hadid is confident all the time, but it turns out that being on sets was incredibly difficult for her during her career. In a recent interview with WWD at Vogue Fashion Festival in Paris, Bella Hadid opened up about her experiences with depression, revealing that at her lowest point, she would cry in between photo shoots on set. As her career began to take off in her late teens, Hadid found herself struggling with both her mental and physical health, as she was diagnosed with Lyme disease in 2012.

"For a while I just didn’t want to talk about it, and I’ve gone through a lot in the past few years with my health," she told WWD, adding that when her health was at its lowest, "I would cry every single morning, I would cry during my lunch breaks, I would cry before I slept." Her experience with depression was compounded by the fact that Hadid was "working 14-hour days for four months straight as an 18-year-old," which she told the outlet, made her "emotionally unstable."

The model also noted that she kept a lot of her experiences with depression to herself for a long time, because, "I feel guilty for being able to live this incredible life, have the opportunities that I do, but somehow still be depressed. It doesn’t make sense."

However, after taking some time away from social media and the spotlight, Hadid realized that it was important for her to be open about her mental health, in order to help others who may be in a similar state of mind. “I just hope I can help in any way I can," Hadid said. "I feel like I would be doing a disservice to myself if I didn’t speak about something such as mental health, because that’s pretty much what I’ve been going through for the past five years very intensely. Now we’re here and we’re good, but it took a while."

While this is one of the first times that Hadid has spoken publicly about her experiences with depression, the model has previously opened up about the impact that living with Lyme disease has had on her life and career. Describing the period of time after her diagnosis — when she was dealing with the frequent symptoms of Lyme disease, like exhaustion, joint pain and fatigue — as "dark," in a 2015 interview with the Evening Standard.

The following year, Hadid was honored by the Global Lyme Alliance, where she reflected on dealing with her health in the public eye. "Life isn't always what it looks like on the outside," she said in her speech, "and the hardest part of this journey is to be judged by the way you look instead of the way you feel."

Hadid's comments about both her experiences with Lyme disease and depression show that it's impossible to understand exactly what someone is dealing with, and her determination to open up about both her mental and physical health makes it clear that she's hoping to show everyone that fame and fortune has no effect on what's happening behind the scenes.