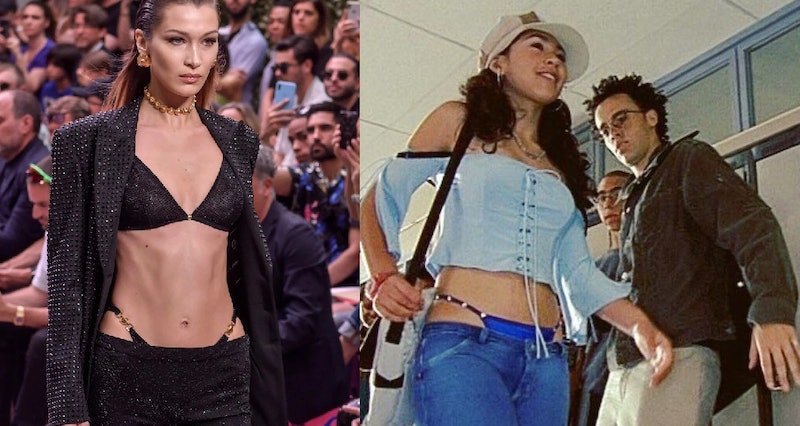 There have been rumblings over the past few months that fashion's '90s obsession is going to follow the calendar and turn into an early-2000s fixation. The wondering has come to an end, as we have just received confirmation this is inevitable. Bella Hadid just wore a visible thong over her pants, bringing the pop-star-approved noughties look back into present day.

Hadid hit the Versace runway with her thong out on June 15, marching down the catwalk in Versace’s spring 2020 menswear show in Milan. The model wore a black sequined pant suit with nothing but a bikini underneath. The trousers were cut low underneath the hip bones, allowing the Versace thong to peek through. Those who grew up with MTV in the early 2000s will know that this was a beloved look for most of the pop and R&B world. Everyone from Xxxtina to Halle Barry to Paris Hilton wore their underwear over their hips, letting their g-string become a central piece of the outfit.

Now thanks to Versace, it looks like that trend might be coming back around. This isn't totally out of left field, though. With the rise of frame-less colored sunglasses, baguette bags, and pleather pantsuits a la Lizzie McGuire, the shift has been slowly there. It's Y2K all over again.

Hadid isn't the first one to endorse the return of the visible thong. Just last year Jennifer Lopez was spotted wearing a visible g-string while on set for a music video. Going back to her Jenny from the Block days, Lopez wore a thong-pant hybrid while filming a music video in Miami with DJ Khaled. Interestingly enough, the pants in question weren't low rise jeans or sweatpants. Instead they were work-attire pants.

According to The Cut, the pants first appeared in Natasha Zinko's London runway show in 2018, whose theme was "Working Woman."

Then more recently, Hailey Baldwin also sported the look to the 2019 Met Gala in May. Dressed by Alexander Wang, Baldwin wore a pink column dress with a low back. A pink thong peeked out from the bottom of the dress.

This was similar to how Gillian Anderson wore her own low-cut red carpet dress in 2001. Agent Scully was a risk taker.

The underwear as outerwear look was also all over TV. For example, Bridget Hennessy from 8 Simple Rules sported the straps underneath her jeans in one episode.

And on Degrassi, Manny Santos donned an exposed thong with her low-rise jeans and a crop peasant top.

It might have been nearly 20 years ago, but it looks like the trend is coming back. Whether we want it to or not.