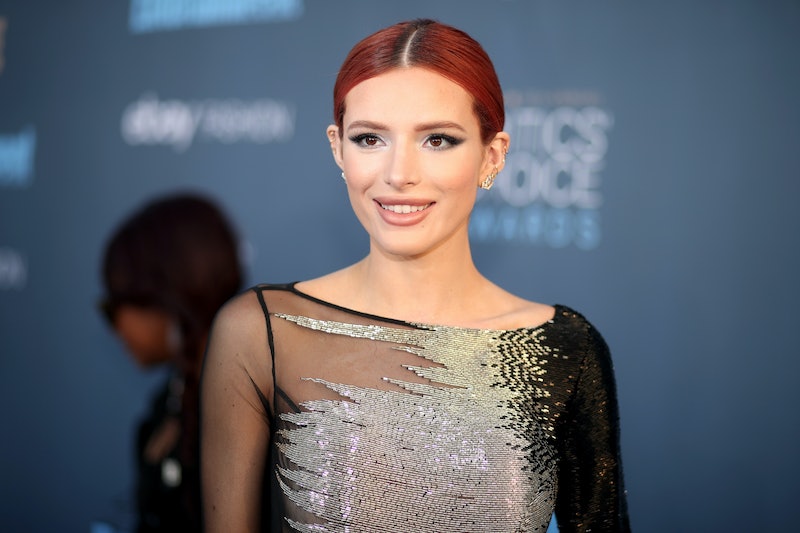 Bella Thorne is unapologetic. She's unapologetic about her appearance, her social media presence — and her involvement with her newest campaign. Thorne has teamed up with athletic fashion brand SIX:02 to launch the "Thank You" campaign, which encourages young women to thank their haters for motivating them to be great. Thorne tells me in an interview about the campaign that she believes it's the perfect fit for her because of her newfound confidence and disregard for bullies. But it wasn't always easy for her to brush off her haters.

When she was younger, Thorne says she dropped out of home schooling because she was being bullied so much. The decision had huge repercussions for the young star, though. A native Spanish speaker, she struggled to learn English and wasn't able to read. “Everyone was like, 'You'll never get anywhere. You're just that dumb, pretty girl," Thorne says. "You can't have a job in this industry at all or in any for that matter because you genuinely can't read."

They were wrong, though, and Thorne showed them just that. After making a name for herself as a young actor, she's now the lead star in the Freeform series Famous In Love. “Sometimes I do have to stop and look and be like, ‘Yo, look how much you really have done,' She says. "Thank you, haters because subconsciously, I guess I was trying to prove you wrong. And look at me. I did it.”

While the Freeform star has built up a strong defense against haters, she confesses that hateful comments still get to her. Thorne says she still has a hard time holding her tongue sometimes, but she’s found that leaning on her close friends, especially her sister, helps her through those low moments. “Everybody goes through bullying,” Thorne says. “It's very likely that the person you turn to is going to say, 'Hey, I understand. I've been through the same thing. Let's talk about it.' Really when you talk about it is when things start to really become so much better.”

While she’s grateful for the help from her sister and friends, Thorne tells me the experience with bullying has helped her realize that self esteem can only come from within. The young actor has discovered a new intrinsic motivation — one that isn’t fueled or crushed by what other people think. “I try not to make it about the haters. I try to just say that you should be motivating yourself. Nobody else should be motivating you,” Thorne says.

Thorne knows that now, and the proof is in the pudding. "To think now that I'm writing a series, that I wrote a short, that I'm directing shit, that I'm reading three scripts today," the young star says, trailing off. Then she adds: "You want to prove to yourself that you can be a better you. That's the best way to go about it." And that's exactly what she's done. Despite everyone who doubted she could never do well in show business, she's unapologetically proud of her success in the hopes that other women will follow suit.

Thorne says the campaign is all about thanking women for being unapologetic. "Thank you to the women out there that are sticking up and saying, 'Hey, no. I'm allowed to say this. You can't say I'm not allowed just because I'm a woman. F*ck you guys. I'm going to be unapologetic. This is me. Take it or leave it," she says.

Encouraging women to be unapologetically themselves? I'll take it. Thorne may have let bullies get to her in the past, but she's not looking back there anymore. She knows now it doesn't matter what others think about her. Bella Thorne thinks Bella Thorne is awesome, and that's all that matters.

More like this
Bella Hadid Nailed Regencycore With Her Met Gala Hairstyle
By Danielle Sinay
The Most Extra Party Girl Beauty Looks From The Early 2000s
By Paris Giles
How To Nail The Slicked-Back Bun (AKA Summer's Easiest Hairstyle)
By Olivia Rose Ferreiro
How To Master Baby Braids, According To TikTok
By Tomi Otekunrin
Get Even More From Bustle — Sign Up For The Newsletter