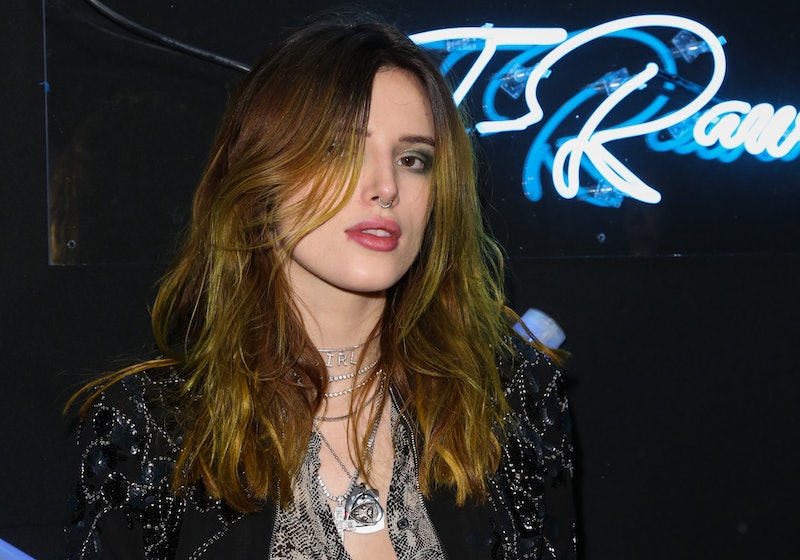 Bella Thorne has long been a champion of body hair and displaying your body however you want — stares be damned — so it's no surprise that Thorne paid tribute to Julia Roberts' underarm hair on social media recently. Roberts' now-iconic body hair display at the 1999 Notting Hill premiere made its way back into the zeitgeist this month when the actress shared how the underarm tufts were an unintentional beauty choice. Many people labeled it a feminist action and an pointed protest against old-fashioned beauty standards that are pushed onto women, but in a recent interview she admitted that she just didn't realize so many people would see her 'pits and decided to skip shaving that day.

During her appearance on Busy Tonight, Roberts shared, "I just hadn’t really calculated my sleeve length and the waving and how those two things would go together and reveal personal things about me. So it wasn't so much a statement, as it's just part of the statement I make as a human on the planet, for myself."

Which is totally relateable. For those who like to shave, there are definitely moments where one skips the razor when they know their body hair won't be on display. (Hello, tights during winter.)

But even if it wasn't a calculated feminist statement, Roberts inspired a whole wave of celebrities and fans to skip the razor themselves and no longer feel pressured to shave if they didn't want to. Thorne is one person in particular that is all about that lifestyle, and on Nov. 16 she decided to pay tribute to the two women before her that paved the way for body hair acceptance.

She featured both Roberts and Madonna in an Instagram carousel, where one photo featured Roberts on the red carpet waving at fans with her fluffy armpit hair on display underneath her cap sleeves, and the other was of a more recent photo of Madonna in her lacy bra, a floating collar, and tufts of hair underneath her raised arms. The photo collage then ends with a picture of Thorne, where she's performing at a concert and her underarm hair is visible as she raises her hands while singing.

The caption reads, "Beautiful in every way." Thorne has gotten a lot of flak in the past for her adamant display of body hair, and the comments underneath the post show her fans are still very split over her decision to throw out the razor. But while there are the usual naysayers, there are just as many folks cheering her on.

"Armpit hair is not just for guys .. we are all human beings so having armpit hair is natural! We must all admire natural beauty...." one follower posted. "Damn straight," another agreed.

Thorne has inspired legions of people to accept their natural bodies and be unapologetic about their decisions, and fans constantly tell her that.

Whether you like to shave or have bushy tufts of hair is completely up to you — as long as you do what feels right and feels true to yourself, that's all that matters.