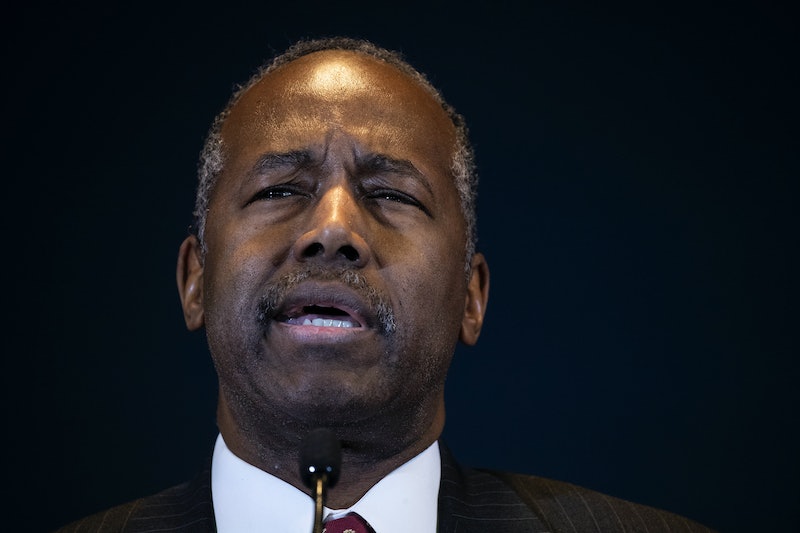 In an interview with Newsmax TV on Monday, Ben Carson said he might leave Trump's cabinet if the president wins a second term. Carson didn't give Newsmax's John Gizzi a definitive answer on the matter. But he did explain why he planned to stick it out for at least the full first term — and why he might not hang around much longer beyond that.

When Gizzi asked Carson about his plans with the Trump administration, the Secretary of Housing and Urban Development gave a very diplomatic and elusive response. He said, "I will certainly finish out this term, and I will always be interested in America being successful."

When asked explicitly if he was interested in a second term with the president, Carson said, "I would be interested in returning to the private sector, because I think you have just as much influence, maybe more, there."

To be clear, Carson did not confirm that he is definitely leaving after Trump's first term. Given that Trump's second term is only a hypothetical right now, there's no way of guaranteeing what will happen after the 2020 election. With that said, he made it clear that he would prefer to return to the private sector rather than to continue political work, all things considered.

Though Carson didn't speak further on the matter, he did talk to Gizzi about a number of other topics related to his work in the Trump administration. When Gizzi asked how often he spoke with POTUS, Carson said, "It depends on what's going on...basically, every time I need him, he's very available."

Gizzi also brought up the recent allegations by Michael Cohen during his testimony before Congress that the president is racist. Specifically, he pointed out that Carson is the highest level black Trump official, and the only black man in Trump's cabinet. In response, Carson said, "I think Cohen is trying to ingratiate himself to the people who hate Trump...I've never seen anything even remotely [that] would remind me of racists, and believe me, I recognize a racist when I see one."

Following his interview with Newsmax, Carson further clarified his plans with the administration in a statement to The Hill:

President Donald J. Trump hired me to do a job as the Secretary of Housing and Urban Development, and we are making tremendous progress ensuring our most vulnerable citizens are empowered with a path to self-sufficiency. I always stand ready to serve this great President and the United States of America.

Carson, who ran unsuccessfully for president in 2016, was hired to run the HUD by Trump even though he had no prior experience in housing development or in the government in general. Per The Chicago Tribune , he experienced mild controversy when he came under congressional scrutiny for his attempts to put a $31,000 dining set in his office on the government budget.

Beyond suggesting he might return to the private sector, Carson has not yet specified what, specifically, he wants to do when his political career comes to an end.