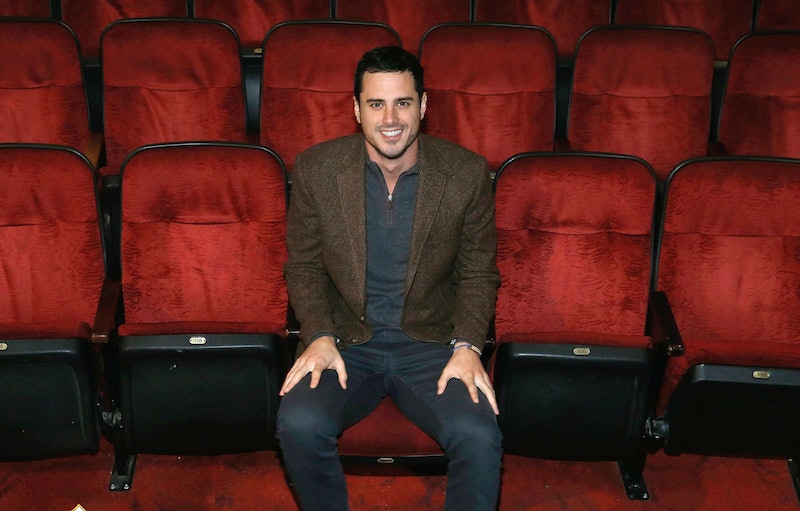 While the fence jump heard around the world might have been the most dramatic thing to happen on The Bachelor this season — or ever — the events that caused that jump were almost equally as devastating and emotional as well. Cassie Randolph and Colton Underwood had a very intense conversation that ended with her in a car on her way home. The breakup was controversial to say the least, leaving viewers confused as to where they stand regarding this relationship. But there is one audience member who knows exactly how he feels about the situation, and Ben Higgins' comments on Cassie and Colton's Bachelor breakup show the he's on his fellow Bachelor's side.

While speaking with Entertainment Tonight's Lauren Zima during Roses and Rosé Live on Tuesday, March 5, the former Bachelor gave his thoughts on what went down between Cassie and Colton. When Zima asked Higgins whether Colton should have handled the situation differently, Higgins actually turned it around. "I think she should have done something different with Colton," Higgins said. "It was very clear that she was not into him."

While he conceded that Cassie was under immense pressure when the breakup took place, Higgins added that she drew it out much longer than necessary. According to him, Cassie should have been more upfront about her feelings, so as not to leave Colton with any doomed hopes about their relationship. Higgins said she was "dancing around the subject," by saying it was all too fast and constantly saying, "I don't know."

He went on, saying, "If she would have just told Colton, 'This isn't going to work, we're not meant for each other,' then Colton just has to say goodbye. He's getting broken up with, and he can't beg and he can't scream for more."

With that in mind, Higgins said he thought it was "fair" for Colton to break down the way he did on Monday's fantasy suite episode, in which the Bachelor begged Cassie to stay and even told her that he loved her. "What Colton did, was he just fought for her, and I think that's fair," Higgins said. "He loves this woman. I don't think she gave him the right explanation. She should have just left and said, 'This isn't going to work,' ... Shut that down."

The former Bachelor did say, however, that as the the story stands right now, it's impossible to really know what happened between Colton and Cassie. "I think it's hard for him right now... A lot of the end of the season, where he's jumping the fence, we don't know how that ends, and that is the most emotional moment we've seen yet," Higgins said. "None of this story... makes sense without the last two episodes," he added. "Right now, we're sitting in a moment where most of the storyline of this show hasn't been played out."

Fans, including Higgins, will soon find out who Colton gives his final rose to at the end of his Bachelor journey. And if it does, somehow, end up to be Cassie, well, it's safe to say at least one former Bachelor is going to have a lot of questions.