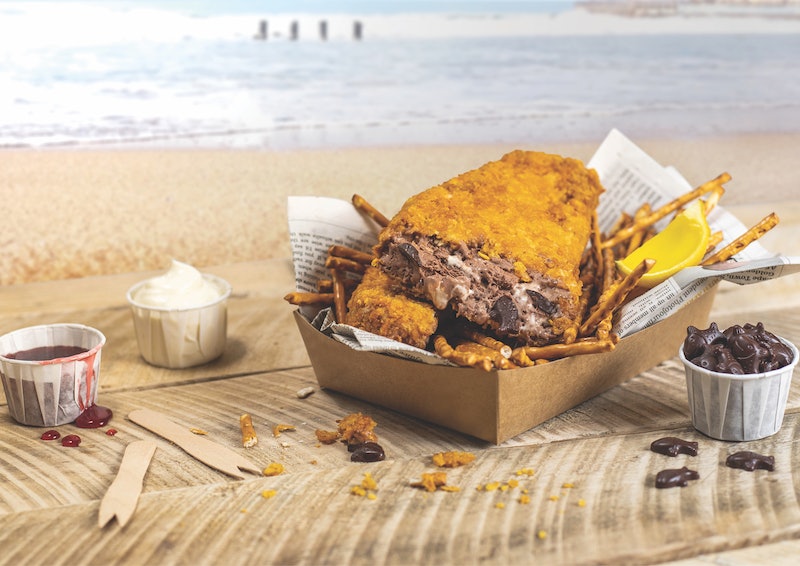 It remains to be seen whether this bout of summer that the UK is experiencing will last, but why not make the most of it while you can? That seems to be Ben & Jerry’s mindset, as they’ve only gone and debuted a new flavour that is a delish tribute to a classic British dish. At first glance, an ice cream inspired by fish and chips doesn’t sound too appealing, but Ben and Jerry’s Phish & Chips ice cream is to die for, trust.

Before you even start thinking about what that may entail, no, it doesn’t actually have fish in it (phew). Instead, it’s a spin on one of Ben & Jerry’s classic flavours — Phish Food. As the company describes in a press statement sent to Bustle, Phish & Chips will consist of the “fan-favourite Phish Food (Fairtrade chocolate ice cream, with marshmallow swirl and chocolate-y shaped fish), lightly coated and fried in a crispy cornflake batter and joined by crunchy, salty pretzel chips, served with sweet raspberry ketchup and smooth mascarpone tartar sauces for dunking.”

How clever is that? You’ve got the salty, crispy flavours of fish and chips but concocted in a way that doesn’t include actual frozen fish or chips. Absolute genius. They also considered this flavour way back in 2009, as The Telegraph reports, when they "launched a global competition to find their next ice cream concoction."

The only thing is though, you won't be able to get it at your local supermarket. As Ben & Jerry’s tells Bustle, your taste buds will only get to experience this delicacy at their Scoop Shop in Soho, starting July 12. Phish & Chips retails at £5.95 and also comes with a vegetarian option, and will be available every Friday (or “Fry-day” as they aptly put it) from 11am — midnight while stocks last. As Ben & Jerry's Flavour Guru sums up:

“We’ve been calling London’s Soho Scoop Shop ‘home’ for over a year now, so we knew we wanted to celebrate with our community the only way we know how. We hope our Phish & Chips experimentation — hot and cold, soft and crunchy, sweet and salty — reels in a treat that will have ice cream lovers hooked!”

You may be thinking that surely if the demand is high enough Phish & Chips, it’ll make its way to supermarket shelves for everyone to experience. Well, as is evidenced in the promo photo of the dish, it’s not served in the most traditional way. This was also the case with their Ice-Ice Bagels last year, which paid homage to the company’s co-founders as they first considered opening a bagel business before they turned to ice cream, as Scoop Shop guru Zara Hall told Metro.

Speaking of the Ice-Ice Bagels, their availability ran from August 24 to September 9, so this could be a similar time frame for Phish & Chips. I mean, there’s always the chance that Ben & Jerry’s could roll these bad boys out in some form in the future, but for now, you can only experience the true Phish & Chips in Soho.

And if you can’t make your way up to London though, you could try and replicate it with a tub of Phish Food in some form or another.

More like this
Pret & Costa’s Coffee Is The Strongest On The High Street, According To Which?
By Sam Ramsden
Ben & Jerry’s New Sundae Flavours Are A Chocoholic’s Dream
By Sophie McEvoy
16 Valentine’s Day Quotes About Chocolate That Will Make You Hungry
By Emma Cueto
Dunkin’s Valentine’s Day Lineup Includes A Drink That Tastes Like Dessert
By Alexis Morillo
Get The Very Best Of Bustle/UK
Sign up for Bustle UK's twice-weekly newsletter, featuring the latest must-watch TV, moving personal stories, and expert advice on the hottest viral buys.