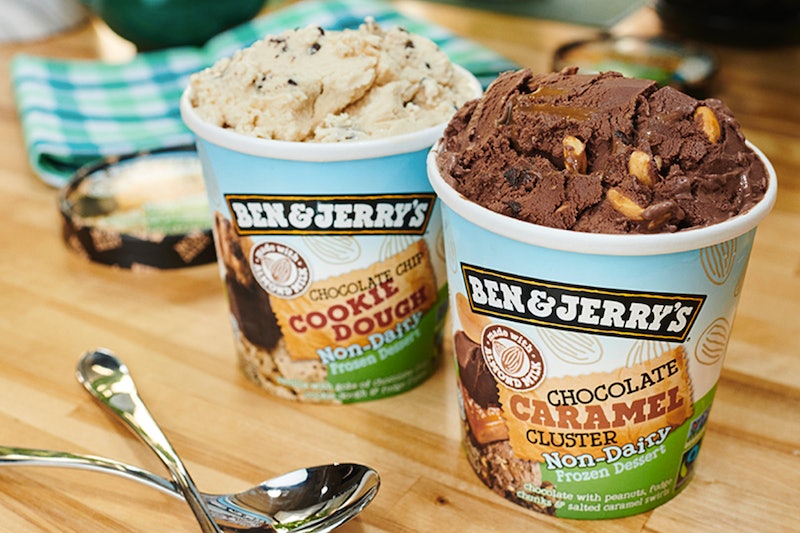 If you're a non-dairy ice cream lover, join me in rejoicing — and making room in the freezer. Lately, several frozen treat companies have debuted brand new vegan and non-dairy options and have made it evident that they wanted as many customers as possible to be able to enjoy their products (regardless of food preferences or dietary restrictions). It's safe to say that non-dairy ice cream choices are on the rise: the market for the frozen aisle option is projected to be worth over $1 billion by 2024. To top it all off, a fan-favorite ice cream company is releasing even more vegan and non-dairy products — that's right, Ben & Jerry's is adding vegan flavors to its all-new speciality line.

That's not the only addition to Ben & Jerry's extensive non-dairy line: vegan Chocolate Caramel Cluster ice cream will also be hitting shelves. Unlike the already super-established Chocolate Chip Cookie Dough flavor, the company explains that Chocolate Caramel Cluster was "created exclusively with Non-Dairy fans in mind." When you open a pint, you can enjoy chocolate ice cream with a blend of peanuts, fudge chunks & salted caramel swirls. I think I've reached non-dairy heaven.

New flavors for Ben & Jerry's non-dairy line have been in the making for some time now. “Ever since we introduced Non-Dairy in 2016, our fans have been clamoring for more,” stated Sarah Fidler, Flavor Guru at Ben & Jerry's. “The biggest challenge this time was creating a chocolate chip cookie dough flavor that stood up to the original. I think we nailed it," she continued. I think you know what that means--you pretty much have to go out and try it for yourselves now.

The introduction of the two new flavors brings Ben & Jerry's non-dairy line up to a total of 11 products, which makes up nearly a quarter of all the brand's full-time flavors (non-dairy really is making strides in the ice cream world). If you've tried some of the line's flavors and desperately want more, stay tuned: there are rumors that Ben & Jerry's will release another non-dairy flavor this coming Spring.

The vegan-certified, non-dairy Chocolate Chip Cookie Dough and Chocolate Caramel Cluster flavors are now available nationwide in grocery store frozen aisles, and at participating Ben & Jerry's Scoop Shops. The products retail for roughly $4-$6, and you can keep your eye out for new flavors by heading to the company's non-dairy line page. Happy eating, everyone.