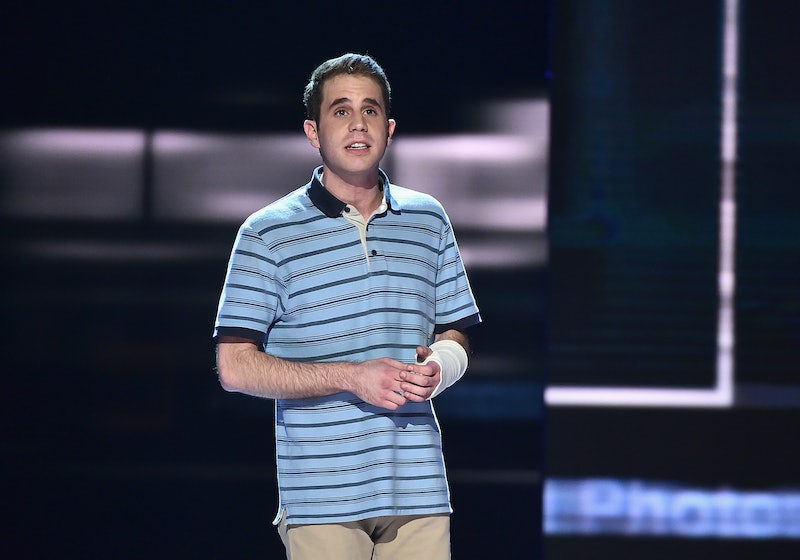 If you haven't been able to make it to Broadway in the past few years, Evan Hansen may be finally coming to you soon instead. Ben Platt says a Dear Evan Hansen movie could definitely happen — as long as it's safe to film, that is. During an appearance on The Tonight Show Starring Jimmy Fallon on Tuesday, June 23, Platt confirmed that a film adaptation of the Broadway musical is in the works, but it all depends on the how the coronavirus pandemic unfolds.

"We're kind of in this weird COVID limbo where anything can happen," he said. "It's something that we've definitely been trying to get together to make happen. I know Universal [Pictures] really wants to make the film. It's a toss-up at this point just based on, can we do it safely and can we get it together in time?"

In June 2020, Deadline reported that Platt was expected to reprise the titular role in Universal's film. While speaking to Fallon, Platt confirmed that he is interested in stepping into Evan Hansen's shoes once again, but his one caveat is the fact that he's grown up a little. Platt is now 26, but took on the role of the high schooler when he was only 23. "Some of us are getting a little long in the tooth," he said, referring to himself. "So I think it's a now or never kind of thing."

Platt originated the role of Evan Hansen in the Broadway musical in December of 2016. The musical went on to win six Tony Awards in 2017, including Best Musical and Best Lead Actor in a Musical. It tells the story of a teenage boy who suffers from social anxiety and gets caught up in a lie that he was best friends with a classmate who committed suicide. There's been no word on whether any of the original Broadway cast will also reprise their roles in the film, but there has been other talks about casting and production.

Booksmart and Unbelievable star Kaitlyn Dever is reportedly in talks to take on the female lead role of Zoe, Evan's love interest whose brother died of suicide. The musical's songwriters Benj Pasek and Justin Paul are already onboard as executive producers, per Deadline. Stephen Chbosky has signed on to direct, while Steve Levenson, who wrote the musical's book, will also tackle the film's script.

Overall, Platt is optimistic that he can take Evan Hansen from stage to screen, saying he's "hopeful it can come together" safely. "As of now, it could really go either way, but I think it could be a beautiful thing still," he told Fallon. "We'll see."

More like this
You Might Want To Rewatch 'Elvis' For This Britney Spears Easter Egg
By Grace Wehniainen
What Does The Presley Family Think Of 'Elvis'?
By Arya Roshanian
Jurnee Smollett’s Heart Is Healing
By Rebecca Carroll
Kimberly J. Brown & Daniel Kountz Looked Back On Their ‘Halloweentown’ Romance
By Stephanie Topacio Long
Get Even More From Bustle — Sign Up For The Newsletter