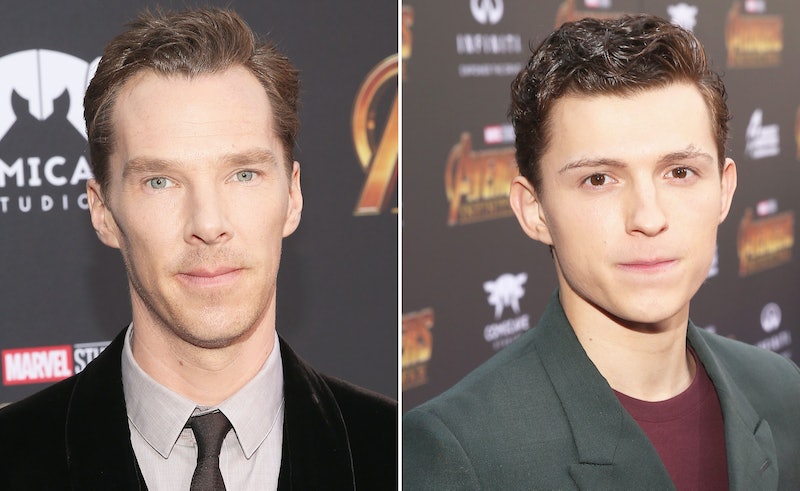 Cast your mind back to April, and the Avengers: Infinity War press tour. More innocent times, yes. A time before we appreciated Marvel's capacity to pulverise our hearts like a single grape in Thanos' fist. A time before, "Mr Stark, I don't feel so good." But set those tormented memories aside for just a second. Remember a certain hand thrusting repeatedly in front of Tom Holland's mouth? Well, directors Anthony and Joe Russo just explained everything to Entertainment Tonight. Turns out, that bizarre moment was actually Benedict Cumberbatch stopping Tom Holland from accidentally spoiling Infinity War for everyone, so effectively. Apparently, he became something of a babysitter on the press tour.

As IndieWire reports, Anthony and Joe Russo appeared on the American entertainment show to promote the DVD and Blu-ray release of Infinity War, a purchase I'll be unable to make without wailing at an unlucky HMV sales assistant. During the interview, host Ash Crossan asked the directors, "How do you feel that Tom Holland spent the entire press tour spoiling aspects of the movie over and over?"

Joe Russo's answer? "What are you going to do? You know. He’s the nicest guy in the world, so you can never be punitive towards Tom Holland." OK, in my opinion, this was the only correct response, because Holland is a precious angelic former Billy Elliot who deserves only protection.

He added: "By the way, Benedict is a great partner for him on the press tour. Because Benedict is actually very good at dancing around spoilers — and monitoring Tom Holland." ("That's hard work," Anthony Russo chipped in.) Which is the heartwarming confirmation we all craved: Cumberbatch was strategically deployed to mind Holland, like a calming donkey placed in a field with a skittish herd of horses.

There are several supercuts on YouTube compiling the many times Holland inched dangerously towards revealing a spoiler, and the equal number of times Cumberbatch lunged into action to stop him, whether by loudly singing Christmas carols or just sticking a hand in front of his mouth.

Speaking of Holland and spoilers, that's exactly how the title of the follow-up to Spider-Man: Homecoming was announced — via an "accidental" glimpse of an iPad on the actor's Instagram. Though an inadvertent title reveal (it's called Spider-Man: Far From Home, by the way) would be very much on brand for Holland, it turns out this spoiler was an authorised one.

Marvel Studios president Kevin Feige told Birth. Movies. Death.: "There are certain logistics of the way these movies are made that meant that title would potentially be leaked in some way because it was going out into the world in various forms. So Mr. Holland took it upon himself to leak it for us."

It's difficult to look forward to part two of Avengers: Infinity War without simultaneous feelings of intense trepidation (I'll never doubt your capacity to hurt me again, Marvel). But if anyone can promise me Cumberbatch will once again be employed as Holland's official babysitter, I'll very much look forward to that.