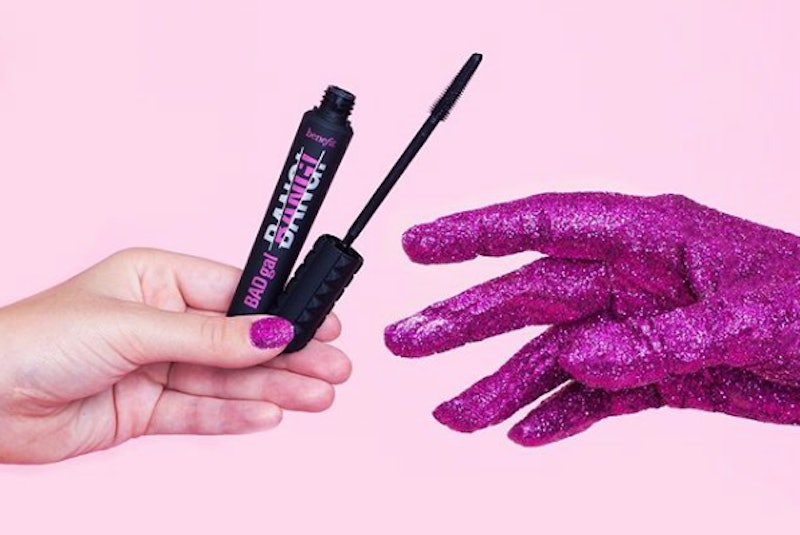 Every year, there is one major mascara that takes the world by storm. In 2016, it was Too Faced's Better Than Sex Mascara. In 2017, it was L'Oreal's Lash Paradise, and it looks like this year's is already here. As PopSugar found, Benefit's Badgal Bang Mascara is getting incredible reviews on social media. Once you see the before and after, it'll be love at first sight.

Mascara is a personal thing, and Benefit somehow managed to roll everyone favorite all into one formula. According to the brand's website, the mascara has 36-hour volume, a weightless formula made with aero-particles, and was derived from space technology. It also has 360 degree wand bristles, but I'm not exactly sure what mascara wand doesn't.

If you like long, slightly-clumped lashes, this is the mascara for you. The mascara came out on at the beginning of February, but people are already raving about it. There's only one review on the the Benefit website, but it's got five-stars and says, "This product is so good I'm never going back!" Add to that the incredible amount of tweets and Instagram photos and you've got yourself a winning mascara.

You can shop the Badgal Bang Mascara on the Benefit website right now for $24, if you're looking to try it out for yourself. You can also shop the product at Sephora, Ulta, Nordstrom, HSN, Macy's, Belk, and Birchbox.

It's worth noting that Benefit did just have a major influencer launch regarding this product. They sent the mascara to tons of YouTubers and bloggers and even took some on vacation with them. Either way, the results don't lie.

People have been posting photos and videos on social media of the mascara on one eye and none on the other. It's clear to see that the mascara means business. The results are actually insane. Although it is a tad bit clumpy, so you'll have to be into that look if you want to be as excited as everyone else.

Not sure if the space-themed mascara is for you? The photos don't lie. Here's all the social media proof that it's out of this world. Because when in doubt, look at reviews online.

The proof is in the video, my friends. Look at the length of those lashes, my friends. The video does not lie, so you can tell why the Twitter user was off to buy it after watching.

Go ahead and take that photo in, because it's a whole lot of volume.

It's not just a want, it's a need. Left versus right, there is no competition.

This review shows that the mascara can look natural as well. There's no word on how it was applied, so you might as well run out and go test it out for yourself.

It truly is incredible. It looks like you're wearing falsies with this mascara on. If drama is your look, then this mascara is for you.

People are using #obsessed a lot and for a good reason. With lashes like this, there's not much else to say.

Just one coat and you get lashes like these.

If this isn't proof enough that you need to try it out, then I don't know what is.