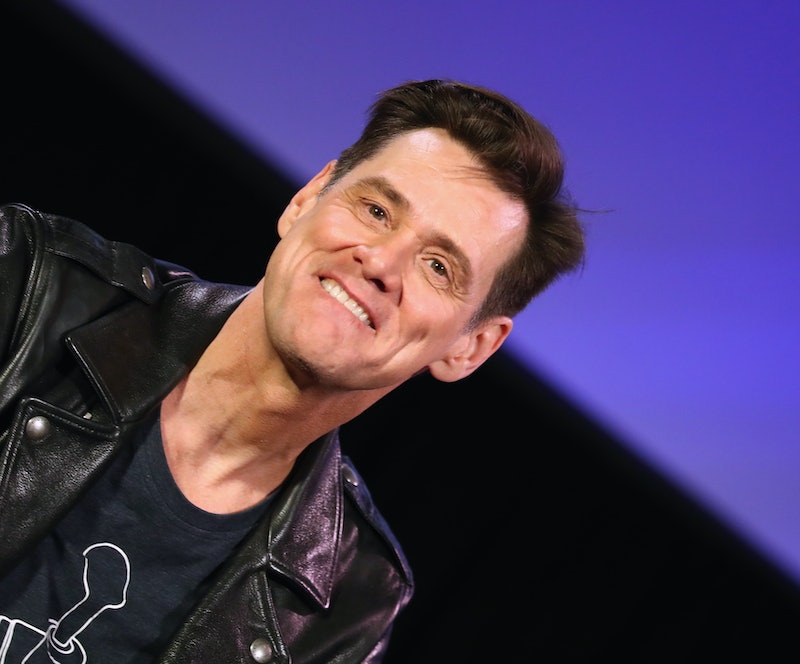 Jim Carrey — if you didn't know — has been painting political artwork for quite a while now, and the latest piece got him the attention of the granddaughter of a 20th Century dictator. Yes, Benito Mussolini's granddaughter is mad at Jim Carrey and is attacking him on Twitter. His followers aren't having it and hers are seemingly underwhelmed.

"If you’re wondering what fascism leads to, just ask Benito Mussolini and his mistress Claretta," Carrey posted with an image of Mussolini and Claretta Petacci hanging by their feet. That's how the two, and others, were strung up in Milan after they were executed by members of the Italian resistance. Mussolini was a dictator whose regime joined together with Hitler's Germany and the Empire of Japan to form the Axis Powers in World War II.

Mussolini's granddaughter, Alessandra Mussolini, responded to Carrey. "You are a b*stard," she wrote on Twitter in a response to his tweet. She then got into a back-and-forth with other commenters, too.

Later, she started posting pictures that she thought Carrey should draw next. All are from problematic points of American history, like the dropping of the atom bomb, stealing land from Native Americans to build Mt. Rushmore, and Rosa Parks' bus boycott. "Now draw this for us," Alessandra writes.

Interestingly, Alessandra is not new to the public sphere. She has been elected both to the Italian House and Senate — as well as the European Parliament, where she has served since 2014, elected as part of a conservative party called Forza Italia.

Alessandra has drawn the attention of the English-speaking media before. In 2011, she addressed a political stalemate on refugees moving between Italy and France by attacking Carla Bruni, the wife of then French President Nicolas Sarkozy. "Why doesn't the first lady welcome immigrants who want to come to France in her chateaux," Alessandra wrote.

Carrey has been making a name for himself with his paintings and political images in recent years. He's been a painter since as far back as 2011. "There’s not a day that goes by that I’m not covered in paint or something from doing sculptures," Carrey said in an interview with W magazine in 2017. "It’s all about that for me now — being completely involved, heart, mind, and soul. Sometimes it’s art, sometimes it’s performance, and sometimes it’s just talking to someone."

Lately it's been political art. Carrey has been uploading political images that he has created, mostly based on the Trump administration, to Twitter.

He's even done one of President Trump himself. It's, to say the least, not very flattering. "Dear Smithsonian National Portrait Gallery @NPG, I know it’s early but I’d like to submit this as the official portrait of our 45th President, Donald J. Trump. It’s called, 'You Scream. I Scream. Will We Ever Stop Screaming?'" Carrey wrote along with the image.

The last Trump image came just last week, a commentary on the president's reaction to the end of the Mueller investigation. "While you’re busy doing your premature endzone dance, don’t trip over the challenge flag you overinflated pigskin! This play WILL be reviewed — and the game is FAR from over!" Carrey wrote.

Twitter has been a fan of Carrey's work, and the Mussolini piece is no different. It had almost 50,000 likes Sunday afternoon. Not one of Alessandra's responses had more than 1,000.