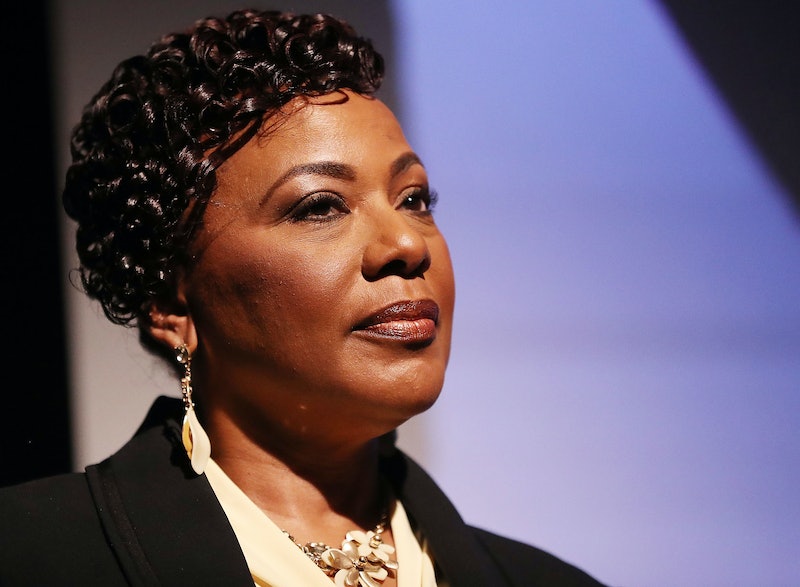 Several high-profile civil rights activists were on the field in the moments just before Sunday's big game, including Martin Luther King Jr.'s youngest daughter. Just as kickoff was happening, Bernice King's Super Bowl tweet shared why being present for the coin toss was so important for her.

"A significant moment," she wrote. "My mission is #JusticeForAll. Humanity is turning the tide and our efforts must include bridge builders, strategic negotiators and ambassadors. #SuperBowl⁠ ⁠ #Atlanta #BuildTheWill #MLK90."

King's presence, alongside Lewis and Young, was significant for a multitude of reasons. For one, Atlanta was a hotbed for the Civil Rights Movement. That the NFL opted to include important figures from that key moment in history was not lost on viewers, if Twitter was any indication.

But secondly, the NFL has been at the center of controversy in the last two and a half years, as it has grappled with how to respond to some players who used game days to protest racial inequality and police brutality. Namely, that has manifested by way of kneeling during the National Anthem.

The kneeling controversy has gone on since August 2016, when the public first noticed that then quarterback for the San Francisco 49ers Colin Kaepernick had begun sitting — and then kneeling — during the National Anthem. Shortly thereafter, he shared that he was protesting racial inequality and police brutality.

"I am not going to stand up to show pride in a flag for a country that oppresses black people and people of color," Kaepernick told NFL Media at the time. "To me, this is bigger than football and it would be selfish on my part to look the other way. There are bodies in the street and people getting paid leave and getting away with murder."

Whether or not it was appropriate to use NFL games as a backdrop for social justice-oriented protests immediately became a contentious debate among not just fans, but politicians, pundits, and other activists, as well. The debate was so widespread that even President Donald Trump weighed in — several times — often zeroing in on the league's ratings.

"Wow, NFL first game ratings are way down over an already really bad last year comparison," Trump tweeted in September 2018, two years after Kaepernick began kneeling during the anthem. "Viewership declined 13%, the lowest in over a decade. If the players stood proudly for our Flag and Anthem, and it is all shown on broadcast, maybe ratings could come back? Otherwise worse!"

At the 2019 Super Bowl game, it didn't look like any NFL players took a knee, according to the live TV stream. However, it wasn't immediately clear whether or not some players kneeled offscreen, or else chose to stay in the locker rooms during the song's duration. But with King, Lewis, and Young present at the coin toss, the game's opening definitely prompted Civil Rights-oriented thoughts.