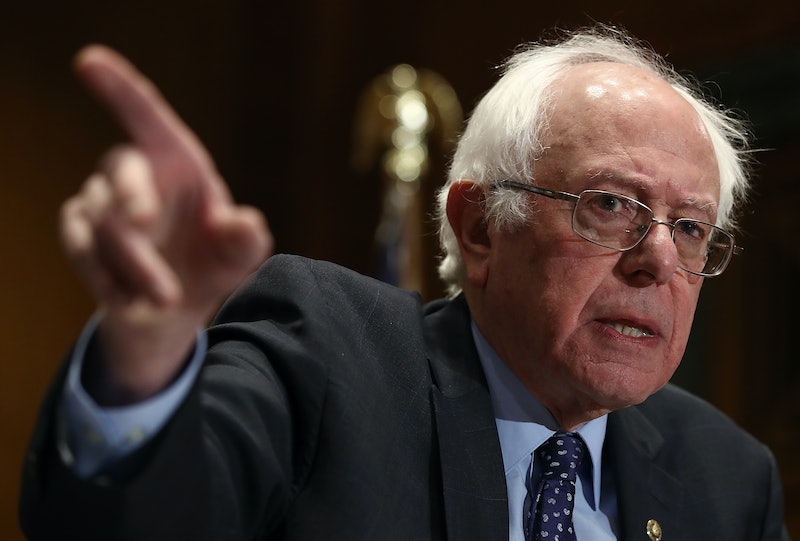 With the 2016 presidential election now far in the rear-view mirror, all the central players are close to getting settled into the roles they'll be playing for the next several years. You've got Donald Trump and Mike Pence awaiting inauguration, Hillary Clinton cooling her heels as a private citizen, and Tim Kaine returning to the Senate. And, not to be forgotten, the Democratic primary's runner-up is back in action too, and he's taking the fight to protect social services straight to the incoming president. Bernie Sanders brought a huge Trump tweet to the Senate floor, confronting Trump on his past promises about social security and Medicare.

It should come as little surprise that Sanders is mounting this effort ― a staunch voice on matters of economics, income equality, and the social safety net, Sanders is more or less the standard-bearer for these sorts of issues on the progressive left right now. It's a role that he's plainly good at, as his competitive primary campaign illustrated.

Here's the poster Sanders took to the Senate floor, showing a tweet of Trump's from May 7, 2015 ― about a month prior to his official entance into the race ― stating that he would not support any cuts to Social Security, Medicare, or Medicaid:

While Sanders has vocally bristled at the sort of less policy-focused, more personality-driven politics that his presidential campaigns demanded, this move shows that he's developed a cagey sense of how to blend the two. Trump's Twitter feed, in addition to being hugely important and newsworthy as an oft-unfiltered catalog of the president-elect's thoughts, also happens to be catnip to mainstream and social media alike.

And also, setting aside the simple insults and attacks he's lobbed at so many people, Trump's Twitter feed is where he's made countless declarative promises about policy issues key to many of his supporters. Suffice to say, many of those same working-class swing voters who nudged him across the finish line do not want to see cuts to Social Security, Medicare, and Medicaid.

Sanders was keenly aware of his strength on these issues as a candidate ― he actually ran on expanding such benefits, and openly championed the prospects of single-payer health care, too.

Sanders tried to hold Trump's feet to the fire on this in advance of taking the tweet to the Senate floor, too. In a press conference earlier in the day, he demanded (with that prototypical moral force he put to such great use during his campaign) that Trump uphold his promise, and pledge to veto any cuts to those programs.

Trump didn't just say this in passing. He didn't say it in the middle of the night. He didn't say it in a particular interview. This was a cornerstone of his campaign. He said it over, and over, and over again. Donald Trump said he will not cut Social Security, he will not cut Medicare, he will not cut Medicaid. Therefore, one of two things are true: either Donald Trump simply lied to the elderly and the working people of this country, and just made campaign promises that he had no intention of ever keeping ― that is one reality. Or there is another reality, and that is right now, before Congress wastes an enormous amount of time, Donald Trump has got to come forward ― maybe through his tweets, one of his tweets, and say clearly, that Donald Trump will veto any legislation that cuts Medicare, that cuts Medicaid, or that cuts Social Security. And if he makes that clear to his Republican colleagues, we can save us all a whole lot of time and start getting to work doing what this country desperately needs to have done.

If it weren't clear enough that the Democratic Party establishment is wholly behind Sanders making these statements, House Minority Leader Nancy Pelosi was right over his shoulder throughout. Simply put, Trump faces a truly effective and blunt political mind in Sanders, someone whose own reputation for authenticity outpaces his own, and complete with far better favorable ratings. In short, the Democrats could do a lot worse than having Sanders for their point-man on these issues, and he seems ready and raring to take up the challenge.