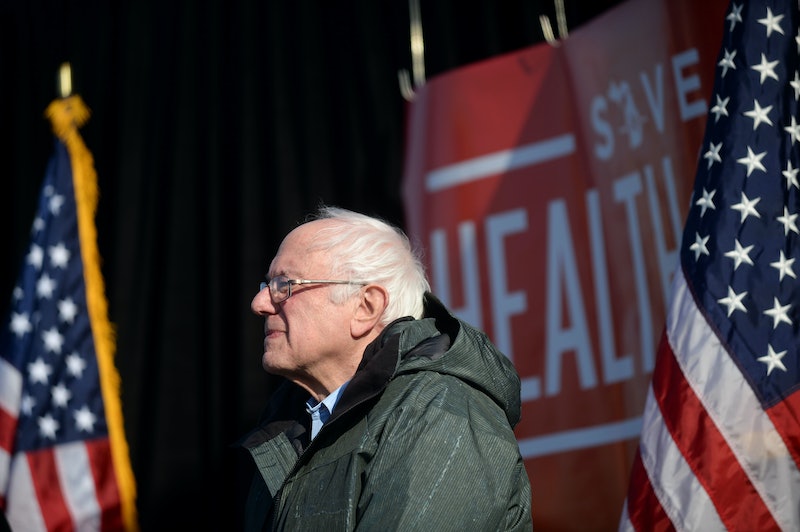 Bernie Sanders and Donald Trump have just about one thing in common: they can both usually be expected to speak their minds without holding back. That's pretty much where the similarities end, though. The independent senator from Vermont hammered this point home on Sunday when Sanders called Trump "a fraud" on CNN's State of the Union.

CNN host Jake Tapper started out the interview by asked Sanders about his stance on Trump's Supreme Court nominee, Neil Gorsuch, and how the nomination should progress. They covered a wide range of topics within the realm of politics, including how Sanders believes that his Republican colleagues in Congress should stand up to Trump and which direction he believes the Democratic Party should go in.

Sanders saved his strongest words, however, for Tapper's question about the Dodd-Frank regulations regarding big banking, which Trump is threatening to relax.

"I have to say this, Jake," Sanders began. "I don't mean to be disrespectful — this guy is a fraud. This guy ran for president of the United States saying, 'I, Donald Trump, I'm going to take on Wall Street — these guys are getting away with murder.' Then suddenly, he appoints all these billionaires."

Coarse though it may seem to call the president a fraud, Sanders does in fact have a point. Trump's cabinet has a net worth that is more than that of a significant portion of America's population, however you slice it. He did promise to take on the big banks, and then he filled his cabinet with former Goldman-Sachs executives. Some have dubbed this Trump's "pretend populism"; Sanders has chosen to call it fraudulence.

Trump has spent the first couple of weeks of his presidency trying to keep his campaign promises, but Sanders speaks for many people when he points out that a team of billionaires are hardly the people to imagine the plight of the little guy. Trump, of course, fits into that mold perfectly, and yet somehow he was able to convince a significant portion of America that he was exactly the man who could protect them from the abuses of Wall Street. Sanders, never one to mince his words, has an explanation for that too.

Trump seems to still be treating the presidency like a new role in a reality TV show. Luckily, the country has people like Sen. Sanders around to try to keep it from becoming that.