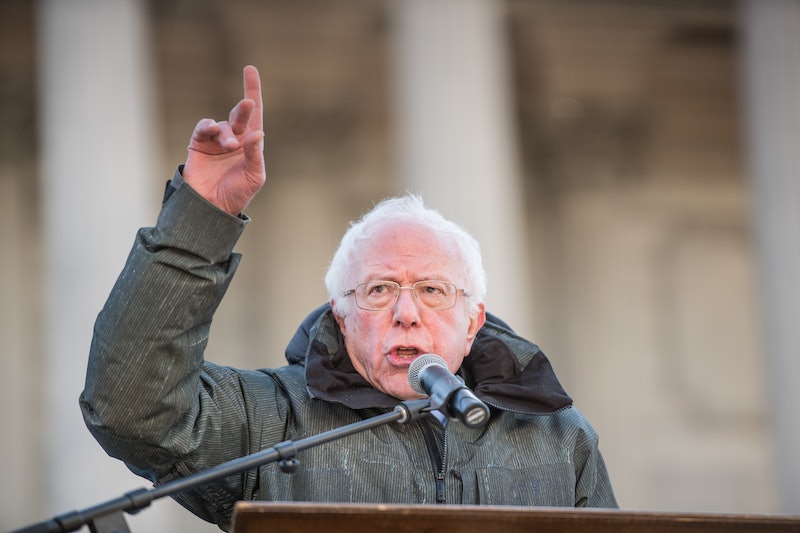 On Martin Luther King Jr. Day, Sen. Bernie Sanders called Trump "a racist" during a speech in South Carolina. Sanders, Sen. Cory Booker (D-New Jersey), and NAACP leaders spoke on the steps of the State House during a rally that was attended by hundreds, according to ABC Columbia.

"Today we talk about justice and today we talk about racism," Sanders told the crowd on Monday. "I must tell you, it gives me no pleasure to tell you that we now have a president of the United States who is a racist."

He continued to say that "we have a president of the United States who has done something that no other president in modern history has done," and who "purposely is trying to divide us up by the color of our skin, by our gender, by the country we came from, by our religion."

Meanwhile, President Donald Trump himself honored the day by making an unexpected visit to King's memorial in Washington D.C. HuffPost reported that he stayed two minutes and didn't mention King while speaking with reporters there. "Good morning, everybody," Trump said. "It's a great day. It's a beautiful day. And thank you for being here. Appreciate it."

Trump's words and actions that have led his critics to call him "racist" stretch back decades. In 1973, the Justice Department accused his real estate company of discriminating against people of color by marking rent applications with a "C" for "colored" and refusing to rent to minorities in majority white buildings (Trump did not admit to any wrongdoing in a 1975 settlement).

Over the years, Trump has been criticized for insisting on the guilt of the "Central Park Five" — the four men of color who were wrongfully accused of raping a white woman in 1989. He took out full-page ads in New York newspapers at the time arguing that the death penalty should be reinstated for them.

During the 2016 election, Democrats often pointed out that Trump was one of the main proponents of the "birtherism" movement that insisted President Barack Obama wasn't born in the United States.

Since becoming president, Trump has been called out for his response to a 2017 white supremacist rally in Charlottesville that resulted in the death of Heather Heyer. Last year, he was accused of calling nations such as Haiti, El Salvador, and places in Africa "sh*thole countries" in the Oval Office. And more recently, his battle with Congress over funding for a border wall led CityLab to dub his wall "a monument to white supremacy."

In her 2018 memoir, former White House aide Omarosa Manigault Newman claimed that Trump uses the n-word, which Trump flatly denied. Around the same time, his former lawyer, Michael Cohen, told Vanity Fair that he intentionally refused to pick a black man as the winner of the first season of The Apprentice. Cohen also alleged that Trump once told him that "black people are too stupid to vote for me." Trump has accused Cohen of lying since he pursued a plea deal with Robert Mueller.

Amid these claims, Trump insists he isn't bigoted. "I'm not a racist," he told reporters in January of 2018. "I am the least racist person you have ever interviewed."