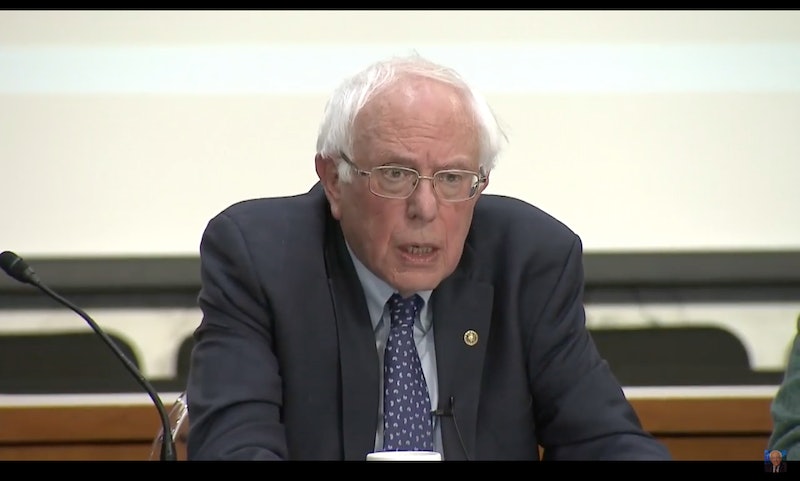 On Tuesday, one senator from Vermont organized a climate change town hall to discuss why many lawmakers believe that urgent action on climate change is essential. Indeed, Bernie Sanders' climate change warning emphasized how little time the world has to get its "act together" to curb global warming so that environmental disasters don't become even more catastrophic.

As The Hill reported, Sanders organized the town hall and spoke on a panel alongside other lawmakers and members of the media. In reflecting on why climate change policies and initiatives must be prioritized, the senator pointed to a narrowing window for action. As Sanders described:

We are living in a moment in history that has never existed before. The best minds in the world are telling us literally that we have twelve years - which is no time at all - to get our act together, if we're going to leave our kids and grandchildren with a planet that is healthy and habitable.

Sanders' comments refer to a recent study from the UN Intergovernmental Panel on Climate Change (IPCC). As The Guardian noted, the study found that there are only 12 years left for global warming to be kept to a maximum of 1.5°C. If warming increases beyond this point, the potential for extreme climate conditions, like droughts and floods, is much higher.

Experts have expressed significant concern regarding the report's findings. Debra Roberts, a co-chair of the working group on impacts, told The Guardian that, essentially, the report drew a "line in the sand." She added, “This is the largest clarion bell from the science community and I hope it mobilizes people and dents the mood of complacency.”

During the town hall, Sanders specifically indicated that he believes that governments will need to strictly regulate the fossil fuel industry if they want to effect the changes needed to curb global warming in such a sort time period. "... Time is late and as a planet that means countries all over the world, not just the U.S and Russia, are going to have to stand up and take on the fossil fuel industry," Sanders said via The Hill. " ... This is a crisis situation, it is unprecedented and we’ve got to act in an unprecedented way.”

As the HuffPost reported, congresswoman-elect Alexandria Ocasio-Cortez also spoke at Sanders' town hall event. The incoming legislator has proposed pursuing a "Green New Deal," which would use federal stimulus funding to expand renewable energy infrastructure — and create a host of jobs in the process. As Carbon Brief reported, supporters of a Green New Deal say that implementing it would ensure that global warming doesn't rise above 1.5°C.

Clearly both Sanders and Ocasio-Cortez believe that urgent and profound action must be taken to curb global warming. Sanders' town hall perhaps offered a glimpse of how progressive Democrats will approach the issue during the next session of Congress. Moreover, the town hall also possibly provided insight into the significant role that climate change could play in a hypothetical presidential campaign platform, should Sanders decide to run in 2020, the HuffPost reported. The outlet noted that Sanders' advisors say he has not yet made a decision about whether he will run for president.