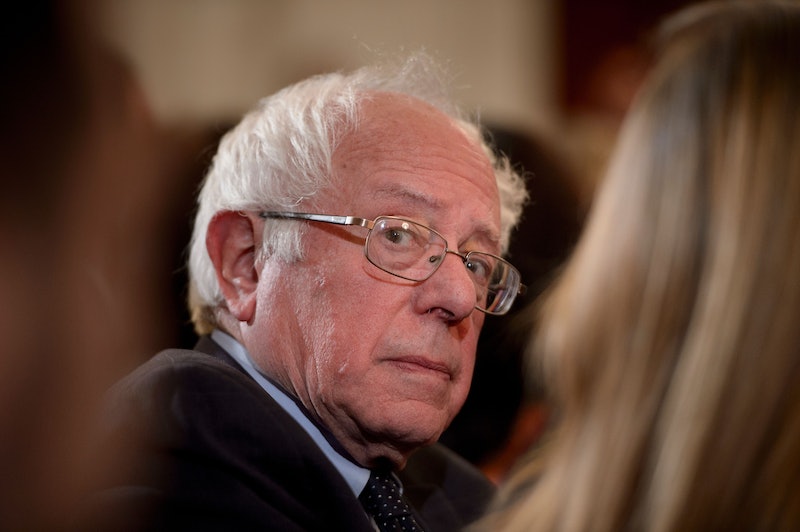 On his third day as president, Donald Trump reinstated the "global gag rule" — officially known as the Mexico City Policy — which cuts off aid for foreign non-governmental organizations that provide, or even discuss, any services related to abortion. This includes: abortion procedures, counseling, recommendations of abortion providers patients can seek, or the mention of abortion as a family-planning method in educational programs. While he hasn't commented on the news yet, it's safe to say that Bernie Sanders opposes Trump on the global gag rule.

Women's reproductive rights were always a major part of Sanders' campaign during the 2016 election. When it came to abortion, the senator from Vermont was more to the left than his opponent, Hillary Clinton. Whereas Sanders opposed any and all restrictions on abortions, including late-term pregnancy terminations, Clinton was in favor of regulations in cases risking the life or health of the mother.

"We must protect and defend the fundamental right of women to control their own bodies, including a woman’s right to have an abortion," he tweeted and stated, on more than one occasion. "We will not return to the days of back-room abortions," he said on another occasion. "The decision about abortion must remain a decision for the woman, not the government."

On Jan. 21, the senator praised the massive Women's March on Washington. "Congratulations to the women marching today. We must go forward to ensure full reproductive justice for all women," he said.

And in addition to general statements supporting a woman's right to choose, Sanders has been a particularly vocal opponent of the Helms and Hyde Amendments. He promised to completely repeal the Helms Amendment, which prohibits any U.S. foreign aid to be used to fund abortions, including rape victims. The Hyde Amendment, which affects women living within the United States, forbids federal funding from being used to finance abortions, except in cases involving rape, life endangerment, or incest. Given this track record, Sanders would undoubtedly be critical of President Trump's latest move.

Judging by this ominous start to his presidency, women's rights activists have definitely got a lot of work to do.