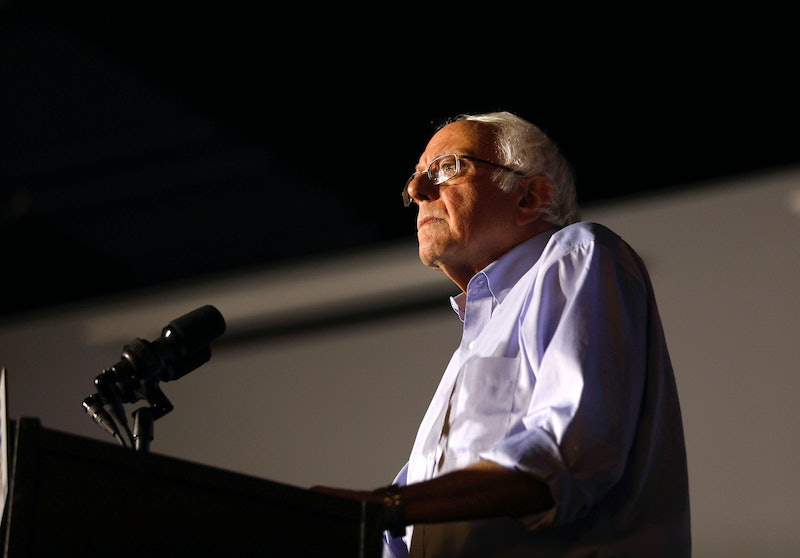 Former Democratic presidential candidate Bernie Sanders spoke at the NAACP's national convention on Monday, focusing largely on health care, CNN reported. And it doesn't look like he minced any words. To put it lightly, Sanders' NAACP talk slammed the GOP health care plan less than one day before a planned vote in the Senate.

Speaking during a federal legislative and policy workshop, Sanders called the bill the "cruelest, most destructive and irresponsible piece of legislation ever brought to the United States Senate in the modern history of this country." He continued, "This legislation is overwhelmingly opposed by the American people, overwhelming opposed by virtually every health care organization in this country." Sanders also spoke about specifics, calling out the lack of pre-existing condition protections and the defunding of Planned Parenthood and Medicaid.

This kind of language likely resonated well with the crowd at the convention. In fact, the NAACP began rejecting the Republican repeal and replace health care bills as early as when the House first started making pushes to repeal Obamacare this March. When the push to repeal moved to the Senate, the NAACP became even more outspoken. "The reality is that communities of color will be particularly hard hit by Trumpcare," Leon W. Russell, chair of the NAACP board, said in a statement back in June, summing up why support of Trump was a mistake:

During his campaign, President Donald Trump asked African-American communities across this nation what we would have to lose by voting for him. And today, the answer is this — our health.

As Sanders looks forward to 2020, the NAACP's support could be vital. Sanders lost the Democratic nomination to Hillary Clinton in large part because he was unable to gain the votes of black Americans, who voted for Clinton with a margin surpassing 50 percentage points. An endorsement by leaders in the NAACP could change that.

In addition to his attack on the health care bill, Sanders mentioned issues that could affect his support among the black community. He touched on criminal justice reform and police department reform, CNN reported, in addition to his economic message of higher minimum wages and Wall Street reform.

Sanders was not the only politician present. He spoke at a panel attended by Democrats Sen. Ben Cardin of Maryland, Sen. Tammy Duckworth of Illinois, Sen. Kamala Harris of California, Rep. Bobby Scott of Virginia, and Rep. Sheila Jackson Lee of Texas. Republican Rep. Scott Taylor of Virginia was there too.

Sanders health care talk may have timed out well given the potential vote Tuesday. But should the health care bill be defeated once and for all, Sanders might want to think about broadening his message — especially if he wants to win a 2020 primary.