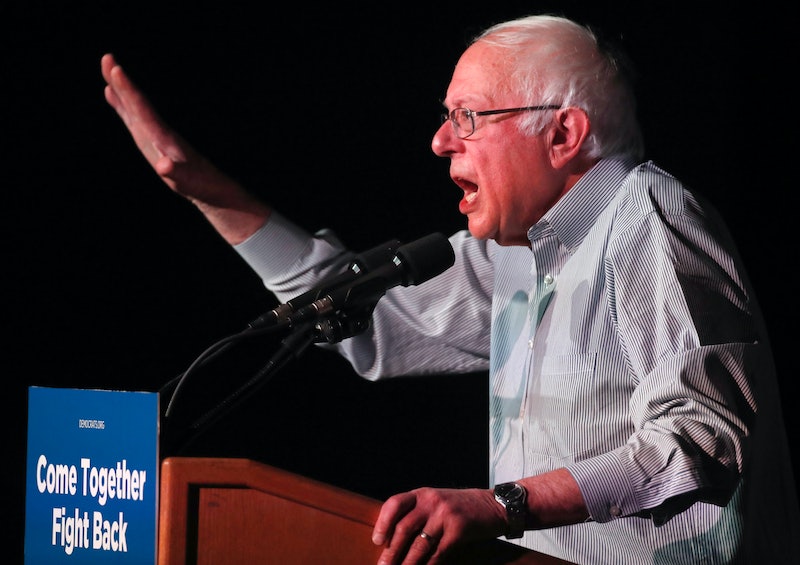 If you've got political whiplash from all the news coming out of Washington this week, there's one guy you can always count on to deliver a consistent and comforting message. Bernie Sanders reintroduced his $15 minimum wage legislation in Congress on Wednesday, which would more than double the current floor of $7.25 per hour. Although the legislation's future looks limited, it still sends a strong message to the GOP about its support for the American working class.

A minimum wage increase was one of the central tenets of Sanders' presidential campaign last year, and little has changed now that he's back to the Senate full-time. Sanders now has a larger coalition of supporters in Congress to back the bill. When he first introduced the legislation in 2015, Sanders was only able to attract five co-sponsors — this iteration of the bill already has support from 23 senators, according to the Huffington Post, and that number could continue to rise.

The discourse around the minimum wage often devolves into a debate about the digits, but the human effect of this huge increase would be the real, meaningful impact. A federal minimum wage of $15 an hour would completely transform millions of Americans' lives. According to the National Law Employment Center, 42 percent of American workers make less than $15 an hour, and nearly 5 percent of all workers make $7.25 an hour or less, according to PBS. With more money circulating through the economy via higher wages, everyone would theoretically get a boost from high investor confidence and a booming stock market.

There are, of course, two sides to the coin — the wage hike needs to be done responsibly or it could cause just as much harm as good. Making sure small businesses don't suffer is one important step, as well as gradually increasing the minimum wage over time so that corporations have time to adjust their operations and markets aren't destabilized. That second provision is one of the reasons Sanders was able to garner more support for this bill than last time. The new version of the legislation spreads the increase out over the course of seven years, starting with an immediate increase to $9.25 and meeting its final goal in 2024. The first bill would have completely phased in the increase in just five years.

Ultimately, however, the legislation could be little more than symbolic. The bill has only a minuscule chance of passing through the Republican-controlled Congress, and Republicans can't afford to look any weaker to their base than Democrats can. Plus, with everything going on right now, between Michael Flynn, NAFTA, and healthcare, minimum wage just might not be the partisan political war to wage right now.

Still, it's a reassuring sign that congressional Democrats aren't just twiddling their thumbs, waiting for the 2018 election and the possibility of a less gridlocked legislature. It's also good to know that they're keeping Republicans on guard — every time that the Democrats do something to prove that they are trying to fight for the little guy, they erode the notion that the GOP is the party for the "average" American. At least the country can count on Sanders to be consistent.