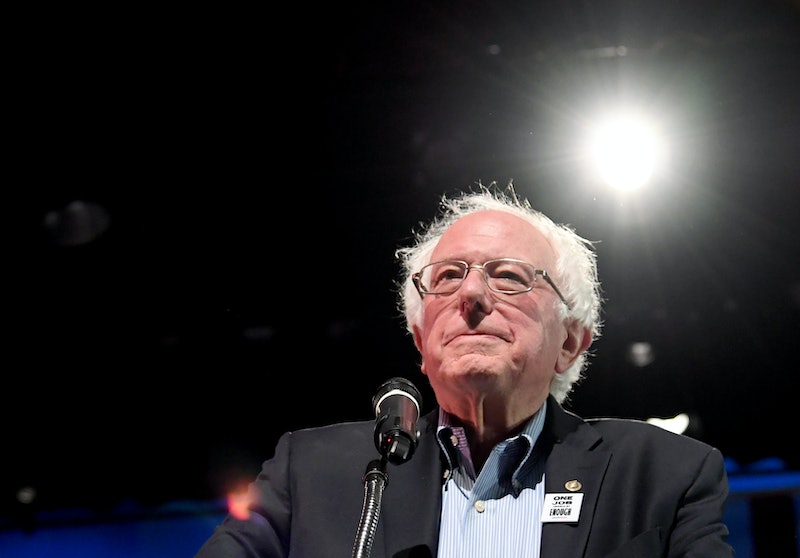 Vermont Sen. Bernie Sanders made a big splash in 2016 when he campaigned in the Democratic presidential primary as a democratic socialist and pushed for progressive values. However, allegations published in The New York Times on Wednesday suggest that Sanders' 2016 campaign may have had its own set of very familiar problems: sexual harassment of female staffers and unequal pay between men and women. Bernie Sanders responded to the sexual harassment allegations on CNN on Wednesday, saying he didn't know about the allegations during the campaign and offering an apology to the women who worked for him.

CNN's Anderson Cooper addressed the allegations about the 2016 Sanders campaign on Anderson Cooper 360, specifically asking Sanders if he had been unaware of the complaints that numerous women made.

"Yes, I was little bit busy running around the country trying to make the case," Sanders told Cooper. In answering Cooper's question, Sanders acknowledged the women's complaints. He explained that the events in question were likely because the organization wasn't able to take care of every HR concern as it grew quickly in such a short period.

"I am not going to sit here and tell you that we did everything right in terms of human resources," Sanders told Cooper. "In terms of addressing the needs that I'm hearing from now, that women felt they were disrespected, that there was sexual harassment which was not dealt with as effectively as possible."

Sanders did not try to deny that the women's claims were true, and he offered them both an apology and a promise for the future.

“I certainly apologize to any woman who felt she was not treated appropriately, and of course if I run we will do better the next time,” he told Cooper. He laid out a set of changes that his 2018 Senate reelection campaign had already made in terms of protecting female employees from sexual harassment, saying that his team had "put forward the strongest set of principles in terms of mandatory training, in terms of women, if they felt harassed, having an independent firm that they can go to."

The New York Times spoke with numerous women who said they had experienced sexual harassment or unequal pay while working on the Sanders campaign. This came soon after Politico published a letter from a group of former 2016 Sanders campaign staffers, who wanted to meet with Sanders to "discuss the issue of sexual violence and harassment on the 2016 campaign," which they referred to as an "untenable and dangerous dynamic that developed during our campaign." Politico also included the letter that Sanders' campaign committee, Friends of Bernie Sanders, sent in response, which thanked the letter's writers for starting the discussion and pledged to do better in future campaigns.

These new allegations could become a problem for Sanders if he decides to run again, as #MeToo and the wave of new women politicians elected to Congress have created the beginnings of a new era in American politics. Bernie Bros' criticisms of Hillary Clinton already caused many people to look at Sanders' campaign with skepticism — and now these allegations have added a new potential problem for the senator going into 2020.