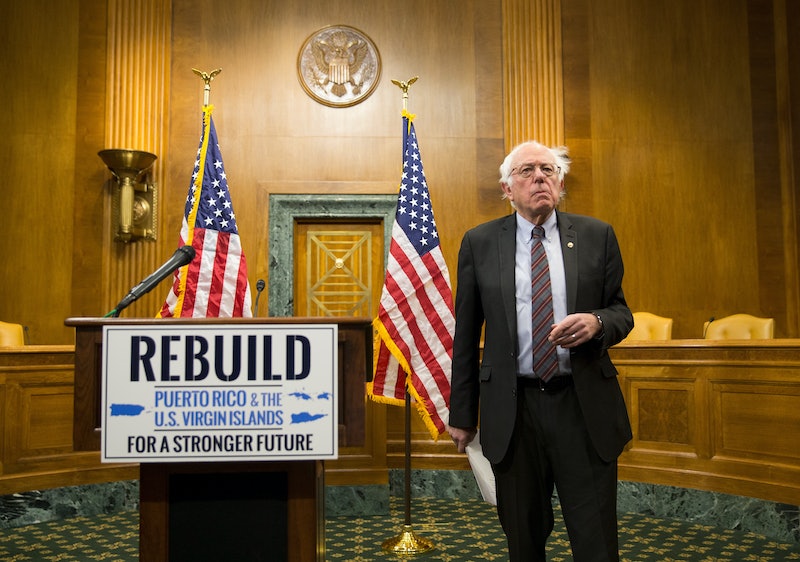 On Monday, Senator of Vermont Bernie Sanders revealed a plan to rebuild Puerto Rico and the Virgin Islands. The ambitious bill prioritizes investment in infrastructure, education, renewable energy, and economic development. "Our bill allows the islands to build back stronger," Sanders said at a press conference. "It makes no sense to simply put things back the way they were."

The plan would invest $146 billion in the two U.S. territories. It is a more generous proposal than the aid packages requested by Puerto Rico's governor ($91 billion) and by the Trump administration ($29 billion for Puerto Rico, Texas, and Florida). The islands are still in the early stages of recovery after being hit by two category five hurricanes, Irma and Maria, within two weeks this September. Months later, around 60 percent of Virgin Islands residents and 40 percent of Puerto Rico residents still do not have power.

Sanders' bill allocates $51 billion to economic development and $27 billion to infrastructure improvement, including highways, railroads, and airports and requires that all of that infrastructure remain publicly owned. Former Puerto Rican official Ramón Luis Nieves called the proposal "the closest we have to a Marshall Plan for Puerto Rico."

The plan also invests in renewable energy development and provides millions in grants for micro-turbines and solar panels. Currently only 2 percent of Puerto Rico's power comes from sustainable energy sources, but Sanders claims that his proposal would lead the island to increase that amount to 70 percent within 10 years.

"It is absolutely without any sense at all to rebuild Puerto Rico's antiquated, centralized, and inefficient electric grid that was dependent on expensive and dirty imported fossil fuel," he said at the press conference. "Two percent electricity from sustainable energy is absurd."

Schools and universities would also benefit from the bill and it gives unemployment benefits to people who are unable to work as a result of the hurricanes. Furthermore, it requires the Federal Emergency Management Agency to create a long-term relief plan in case the islands are ever again hit with storms of that magnitude.

Although it specifies where the aid money should be allocated, Sanders' plan gives the territories considerable control over how it is spent. Proponents of the bill say that this will empower the islands to shape their own future.

"Puerto Ricans are American citizens," MoveOn's Washington Director Ben Wikler tells Bustle. "Sanders’s bill reflects the fundamental principle that that there shouldn’t be second-class citizens in this country. It’s long past time to fully address both the immediate crisis and its underlying causes."

But the plan is not without its flaws. "The proposal should give specifics on debt relief, which it doesn’t do," Gordon McCord of UC San Diego's Global Policy and Strategy tells Bustle. Instead, it broadly encourages Congress to relieve Puerto Rico's $74.8 billion debt. "The discussion of Puerto Rico’s debt should be in the context of a crisis, and the federal government should [be] fostering debt restructuring and a moratorium on servicing the debt until Puerto Rico surpasses a predefined threshold of recovery (a particular level of GDP, perhaps)."

McCord also suggests that the bill would be improved if it included a "relaxation" of the 1920 Jones Act, which decreed that cargo moved between U.S. ports must be transported by U.S. ships. "Allowing Puerto Rico to pursue least-cost suppliers and least-cost transportation options reduces the cost of reconstruction and recovery," he says. "I would end the Jones Act permanently for Puerto Rico, but in lieu of that I would exempt Puerto Rico from it until a threshold of GDP is passed."

Sanders' bill is co-sponsored by several other Democratic senators, including Elizabeth Warren, Kamala Harris, and Kirsten Gillibrand. The Washington Post reports that it will probably not pass and that the Trump administration's $29 billion proposal is favored.

"Our schools have been devastated to the point where the children are doing half days and doing double shifts at different schools that are left," said Stacey Plaskett, a representative from the Virgin Islands, at the press conference. "That's unacceptable. That would not be expected on the mainland, and none of you would accept that if that happened in your states."

"All of this is going on in the United States of America, the wealthiest country in the history of the world," Sanders said when he concluded the press conference. "So again, let me conclude by simply saying our message to the people of Puerto Rico and the people of the Virgin Islands: You are not alone, we have not forgotten you, and we're going to continue the fight to rebuild those beautiful islands."