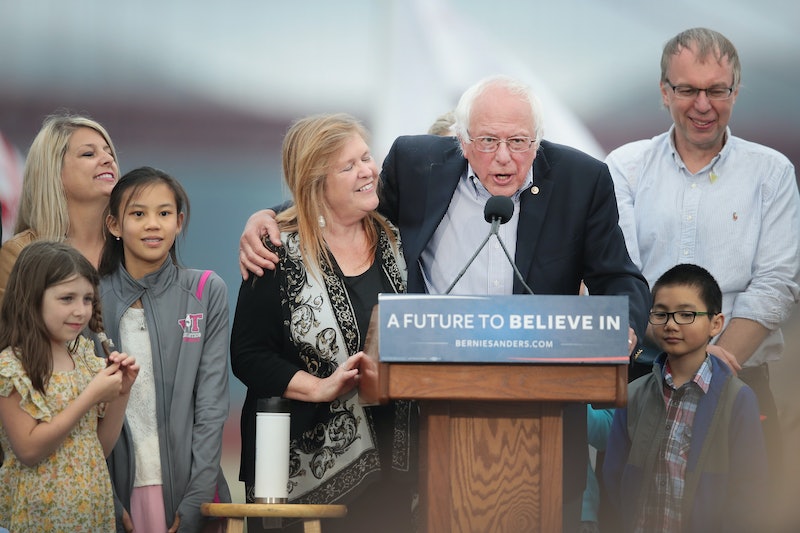 In a statement released on his campaign website on Monday, Bernie Sanders' son, Levi, announced he's running for office, joining the field of Democrats and Republicans seeking to fill the open House seat in New Hampshire's 1st congressional district. Levi, 48, has lived in the state for years with his family and called running for Congress "a unique opportunity to listen to the hard working men and women of New Hampshire about the issues that matter to them."

Levi's entry into the race means a total of eight Democrats and three Republicans are now running for the open congressional seat being vacated by Carol Shea-Porter, a Democrat who is not seeking re-election. According to WMUR, the amount of viable candidates in the race renders it one of the most competitive congressional races in the country.

WMUR also noted that Levi has the unique status of not residing in the 1st Congressional District in which he is running. His family home is actually in New Hampshire's 2nd congressional district, but the U.S. Constitution only mandates that congressional representatives live in the state where they are elected, not the specific district. According to WMUR, running in a non-residential district is rare, but not unprecedented.

According to The Hill, the district in which Levi is running includes most of southeast New Hampshire. It also has a tendency to shift from Democrat to Republican.

In the statement announcing his run on his campaign website, Levi noted that he believes it is time to create a system and policies that work for everyone, writing "For over 17 years, I have represented the working class who have been beaten up by the system. It is time to demand that we have a system which represents the 99% and not the 1% who have never had it so good."

Levi also discussed some of his policy goals on his website. The candidate revealed that he supports a Medicare For All health care system, which would allow for health coverage for every resident of New Hampshire. He also expressed his support for free public college education, regardless of one's ability to pay, and for a living minimum wage that ensures people are not in poverty. Levi further noted the urgency of addressing several other issues, including pay inequality between men and women, the opioid crisis, and passing gun control legislation.

According to WMUR, Levi grew up in St. Johnsbury, Vermont and attended the University of Oregon, graduating in 1992. He has worked for Cambridge and Somerville Legals Services in Massachusetts since 2000. WMUR reported that, according to LinkedIn, Levi is employed at the organization as a Social Security disability insurance and supplemental security income benefits specialist. Levi was also a senior advisor on his father's presidential campaign.

According to ABC News, he will likely face a challenging battle in the race for the congressional seat, particularly from fellow Democrats. The outlet noted that many of Levi's father's political consultants are actually working for another Democratic candidate in the race, State Representative Mark McKenzie, which presents a unique challenge.

Moreover, ABC News also pointed out that Democratic candidate Chris Pappas, poses a particular threat to Levi, as he is highly well known in New Hampshire and already enmeshed in the state's political institutions. Maura Sullivan, another Democratic candidate and a former top official in President Barack Obama's Veterans Administration, also had very strong fundraising numbers at the end of 2017.

Regardless of the competitive nature of the race, though, Levi appears committed to achieving his objective for the sake of fellow New Hampshirites. "This campaign is about each and everyone of us, who strive each and everyday, to make this great state and country a better place in which to live," he said.