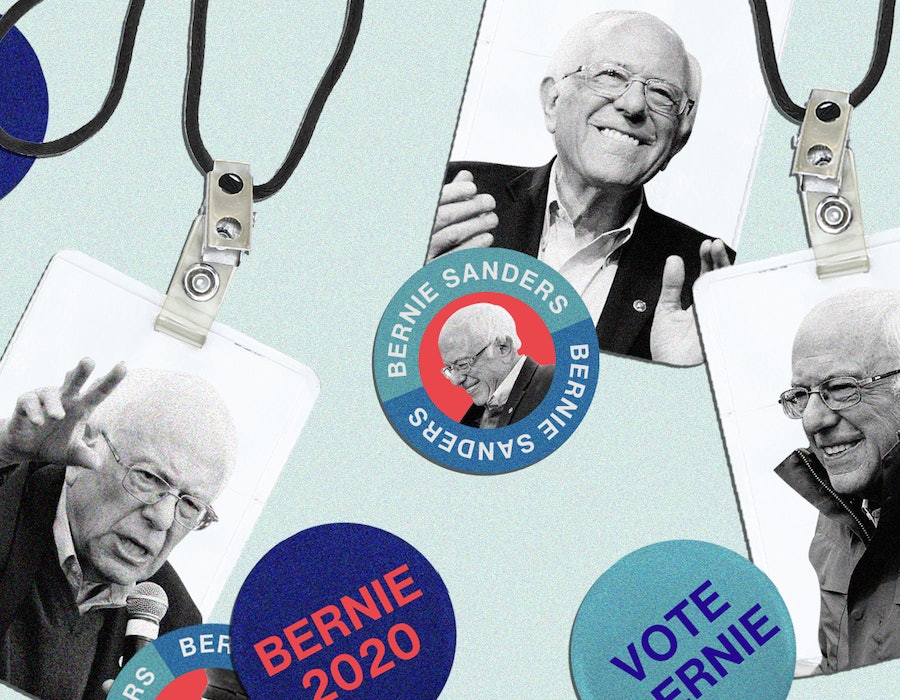 Over the next few weeks in "Backstage Pass: The Millennials Shaping the Primaries," Bustle will publish interviews with 20-somethings on the campaign trail. To read other off-stage, on-the-record stories, click here. Next up: Eileen Garcia, Sen. Bernie Sanders' national surrogate communications coordinator.

In March 2019, Eileen Garcia emailed her resume to the Bernie Sanders campaign. The Miami native already had a lot on her plate: She was a sophomore at American University in Washington D.C. and was working part-time managing social media accounts and writing proposals for a political consulting firm. Garcia had long supported the Vermont senator, and landed a job as a Spanish translator on his campaign. In the last year, she’s worked her way up to her current position, national surrogate communications coordinator, in which she works with the campaign’s surrogates — that is, the celebrities, activists, and policy experts who’ve endorsed Sanders and often appear on his behalf. The list is long, including everyone from Ariana Grande and Vampire Weekend to Dick Van Dyke. Here, the campaign wunderkind, now 21, shares snippets from the job.

What do you do in your role?

I try to make our surrogates effective messengers. I provide them with briefings and information about Sen. Sanders’ policies and the issues we want to highlight. My job is to find ways to help them use their backgrounds to communicate our issues to voters.

What’s the most important thing you want them to convey?

The way that their personal experiences are influenced by policies. We always want the senator’s platform to feel personal. [For example,] Mike Posner has a story of struggling with [his] health. He shared a deeply emotional story. We connected him to volunteers in Iowa, and he went knocking on doors.

Why should someone listen to the political opinions of a celebrity?

It’s not necessarily, “Cardi B likes Bernie, so I like Bernie.” It’s, “Why does Cardi B like Bernie?” Then you pull up the video of Cardi B and Bernie at the nail salon, and people find that cool and want to know more. They’re using their platforms to reach a segment of the population that isn’t being spoken to.

How’d you work your way up from being a campaign translator to your current job?

Something I’ve always done, and my biggest piece of advice, is ask how you can help. I always ask my colleagues, “Hey, is there a task I can do? Could you use an extra set of hands?” As the campaign picked up, I was being handed tasks, which showed people I was capable of doing them.

How has the coronavirus pandemic changed your daily work?

The campaign has ordered all staff, volunteers, and supporters to stay home. We don’t want to put [surrogates] in a situation where they could be exposed. Rather than flying them out to events and out to voters, we’ve shifted to: How can they talk to voters online? What’s a webinar we could do with a high-profile surrogate? Can we do a digital show featuring a surrogate to get voters to tune in and educate them?

A segment of Sanders supporters have been criticized for harassing and bullying people who don’t support him. How do you deal with that?

As the senator says, we don’t condone that behavior. We have supporters from all types of backgrounds, and some of those backgrounds [make life] really hard. I understand when people want to lash out. When you’re living in a difficult situation, sometimes you don’t know what to do. I always empower our surrogates to respond with love and open arms, and say, “I don’t agree with how you’re communicating, but I understand, and I want to help you.”

You must be one of the youngest staffers. What’s that like?

It’s really empowering. I think it’s reflective of the campaign at large. We don’t take the approach, “You have X years of experience or X degrees, and therefore are capable of influencing strategy.” We say, “Experience isn’t limited to how many years of employment or how many degrees you have.” “Experience” looks like someone like me, who grew up in a low-income background, who struggled in college, and who has a chronic autoimmune disease. On this campaign, we have young people and older people. We all have a seat at the table.

Do you ever have to explain what young people are into?

Oh, definitely. There are moments with TikTok [and] Twitter. What bands are college kids listening to right now? I’m always like, “Let me chime in real quick. I got you.” [Laughs]