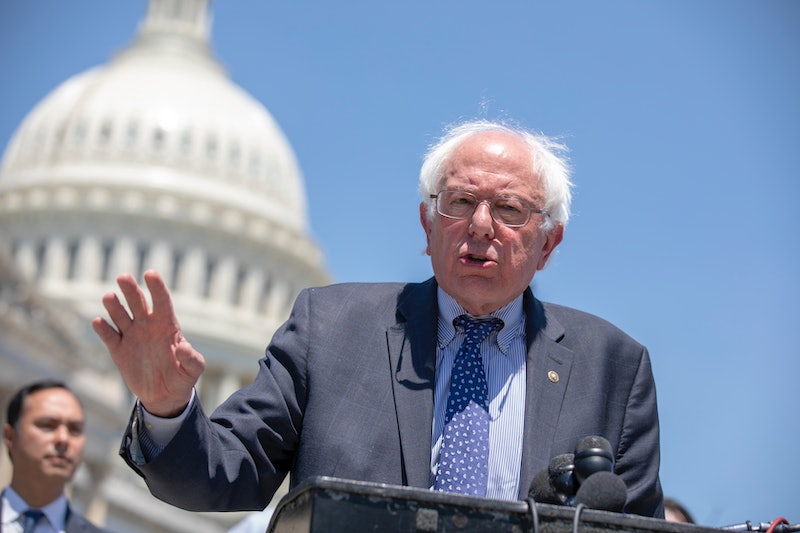 Democrats might be looking extremely competitive in several key midterm races, but that doesn't necessarily mean they're going to flip the House. In a conversation with Hill.TV on Monday, Vermont Senator Bernie Sanders suggested the "blue wave" theory of Democrats sweeping the 2018 midterms might just be a myth. He added that most midterm races might actually be much closer than some Democratic voters expect. This, he explained, is why it's so important to actually show up and vote, regardless of the apparent momentum of one political party or another.

Sanders said to Hill.TV co-host Krystal Ball, “I know a lot of people talk about this blue wave. I don’t believe it." He continued, "I happen to think that on election night you’re going to find a very close situation and maybe a handful of votes determining whether Democrats are gaining control of the House."

Sanders might just be onto something. According to data provided by TargetSmart and analyzed by NBC News, early voting results in several key states have reflected a higher turnout of Republican voters than Democratic voters. These states include Arizona, Florida, Georgia, Indiana, Montana, Tennessee, and Texas; NBC notes that seven of these eight states are hosting "key" Senate races, meaning that the outcome of those states will greatly affect the power of either party in the Senate.

Of course, early voting results are anything but a guaranteed predictor for how an election will turn out. But with that said, these early insights aren't a massive win for anyone hoping for the certainty of a "blue wave" in the midterms, either.

Sanders seems to have dealt with his uncertainty of a "blue wave" by choosing to act, rather than sit at home and worry about these early results. He has spent the summer traveling the country to campaign for progressive Democrats, stumping for candidates for Senate and Congress alike. When asked what he believed the stakes of the midterms were during his interview with Hill.TV, he replied:

They're monumental. I mean, you don't want to become overly dramatic ... [but] we're playing for the future of this country. You have a president who is a pathological liar and who is the most dangerous president in the modern history of this country. If he continues to have Republican control over the House and the Senate, if we continue to allow him to divide us ... then we're moving pretty rapidly to an oligarchic form of society.

Sanders concluded by saying, "Control over the House has everything to do with whether that happens or not."

No matter what political party you belong to (if any at all), it's incredibly important to show up and vote for the politicians who espouse the beliefs that you wish to see reflected within your governing body. You can find information on whether you're a registered voter or not at Vote Save America.

This site will also provide you with a Voters' Guide, which offers you a full breakdown of what will be on your specific ballot, from biographies of the politicians running for office in your area to explanations on specific measures that you have the opportunity to vote for or against. With resources such as these available at your fingertips, voting in the midterms this November should be a given for anyone who's of age.