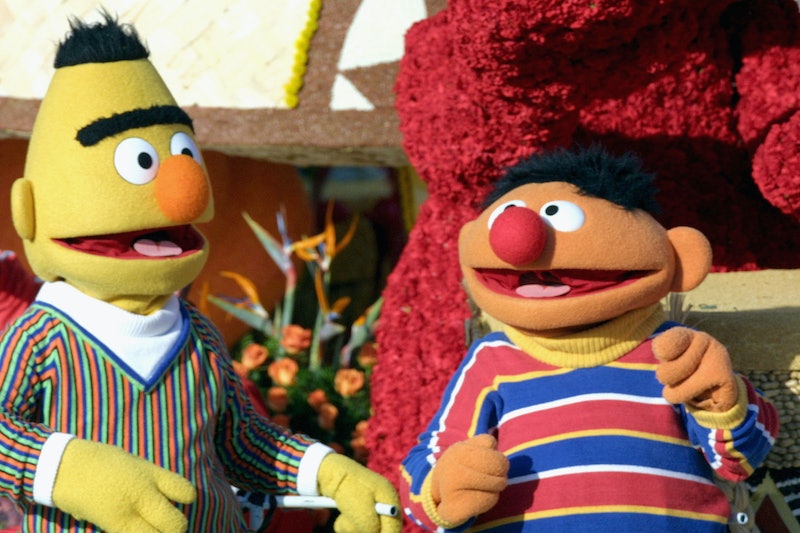 For many years, Sesame Street has managed to capture the hearts of millions of children around the world. But more than just featuring lovable characters, the show makes a point of educating kids on all matters of life, whether it's figuring out that pesky alphabet or learning what it means to be a friend. But now one of the show's greatest mysteries has finally been solved in regards to the special relationship shared by two iconic roommates. A Sesame Street writer has confirmed that Bert and Ernie are gay and let's all just collective say that it's about darn time.

For the better part of 50 years, Bert and Ernie have been inseparable, through good times and bad. For better and for worse. So having them finally be able to come out of the closet is a big relief — not to mention extremely overdue. The writer behind this big revelation is Mark Saltzman, who has written various scripts and songs for the beloved series since 1984. So he is rather an expert on the matter, given how much of his time and energy he's dedicated to these puppets. That said, this just one writer's opinion, and other creators behind the muppets, like Frank Oz, have already contradicted the assertion. "It's fine that he feels they are," Oz wrote on Twitter. "They're not, of course."

During a recent interview with LGBTQ lifestyle site Queerty, Saltzman opened up about how he always viewed Bert and Ernie as a reflection of his own relationship with editor Arnold Glassman, though it was never meant to push any type of agenda on the show's behalf. “I always felt that without a huge agenda, when I was writing Bert and Ernie, they were [gay]," He told the outlet. "I didn’t have any other way to contextualize them. The other thing was, more than one person referred to Arnie and I as 'Bert and Ernie.'"

Salzman went on to add:

However, Sesame Workshop doesn't agree with Saltzman's assessment of Bert and Ernie's relationship. In fact, they released a statement on Twitter shortly after the interview started to gain traction, denying that any of it is true and that Bert and Ernie are strictly just friends.

The statement reads in full:

“As we have always said, Bert and Ernie are best friends. They were created to teach preschoolers that people can be good friends with those who are very different from themselves. Even though they are identified as male characters and possess many human traits and characteristics (as most Sesame Street Muppets do), they remain puppets, and do not have a sexual orientation.”

To some this may not seem like a big deal, but Sesame Street has become so ingrained in our childhoods, it helps shape who we are and how we view the world. Having a gay couple on the show would allow for more inclusion of minority groups that deserve a voice. It's what Bert and Ernie would want. At the very least, it's what Twitter wants.

More like this
Hilarie Burton Calls Candace Cameron Bure A "Bigot" After Marriage Comments
By Jake Viswanath
Read Dan Levy's Heartbreaking Message After The Club Q Shooting
By Stephanie Topacio Long
The First Trailer For 'That '90s Show' Includes So Many Nods To The Original Series
By Jack Irvin, Alyssa Lapid and Grace Wehniainen
How The Thanksgiving Episode Of 'Gossip Girl' Changed Pop Culture History
By Gabrielle Bondi
Get Even More From Bustle — Sign Up For The Newsletter