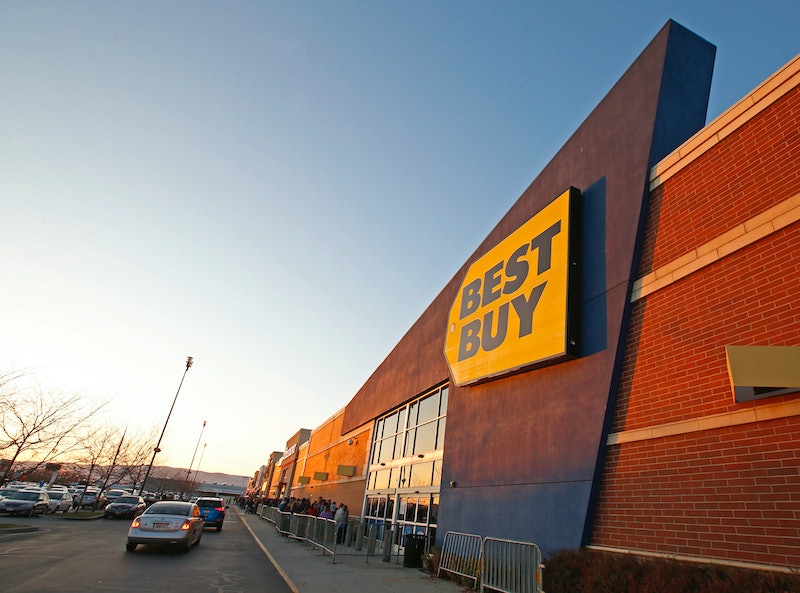 According to Billboard, Best Buy told music suppliers that Best Buy is pulling CDs from its stores The chain of over one thousand stores in the United States anticipates CDs will be off the shelves completely by July 1. Many attribute this decision to the fact CD sales have declined with the rise of streaming services. The reemergence of vinyl and cassette tapes as popular ways to consume music likely contributes to the decision, as well. (Bustle has reached out to Best Buy for comment, and will update upon response.)

At one point in time, Best Buy was viewed as one of the country's premiere music merchandisers; with aisles and aisles of its warehouse-size locations dedicated to CDs. But in recent years, these offerings have dwindled, and Best Buy's music section is easily overshadowed by its much larger sections devoted to computer electronics, televisions, cameras, and even home appliances.

The decision to remove CDs from the shelves of Best Buy's stores is less indicative of a failure on their part as a company, rather than an illustration of the effects of the cultural shift in how the public consumes music. According to Billboard, CD sales in the United States were down 18.5 percent during the last fiscal year. Similar reports suggest Best Buy's CD offerings are only generating around $40 million in annual revenue (a mere .001 of the company's $39.4 billion revenue during the 2017 fiscal year).

For many music lovers, physical copies of albums remain preferred over their digital counterparts, and listeners have been taking to social media the past few days to voice their disappointment.

While removing the physical component of music (and opting for digital audio instead) may feel easier and more accessible, critics argue that getting rid of CDs removes the often-overlooked, but critical appeals of tangible albums. The actual music is far from the only component of an album. Artwork, lyric lists, and fold-outs booklets, as well as possible demos included on the track list are also integral aspects, and carefully constructed and organized to complement an album's sound.

Members of the music industry have also voiced concerns about the industry's seemingly inevitable pivot to fully-digital music consumption, particularly in terms of how this will impact smaller musicians. In an article for The Baffler, journalist Liz Pelly explores the inner-workings of the algorithms of digital music platforms. Often the platforms will boost playlists on its front page, which in turn, she argues, makes users less likely to listen to complete albums, and smaller acts who turn to these services to promote albums could suffer.

CD's first began hitting store shelves in 1982, with Billy Joel's "52nd Street" holding the title of first commercially-released album (it had originally been released four years prior.) At the height of their popularity in the mid-'90s, CD sales were easily passing two billion annually. At the time, the format seemed too good to be true, as the discs were easier and more inexpensive to produce than vinyl, allowing record companies to gather more profit per sale. After the first generation iPod was released in 2001, the dream of truly portable music became a reality, signaling the beginning of the massive shift in audio consumption happening today.

For some, Best Buy's decision (with rumors that other chains will follow suit shortly) to stop carrying CDs is hard to swallow, as it is perhaps the loudest signal music is drifting away from the tangible formats many have grown to love. But those worried about a complete shift to digital media need not despair. Though CD sales have plummeted, sales of vinyl records grew an unprecedented 53 percent in 2015; with more albums sold in a year since 1991. For this reason Best Buy has decided to continue selling vinyl records and turntables at least through 2020.