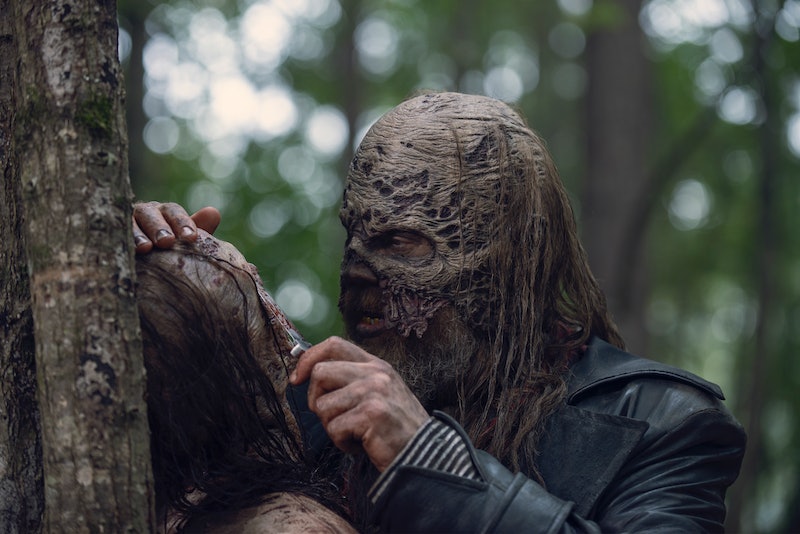 Lydia warned us about The Whisperers on The Walking Dead, but actually following this villainous crew around for an episode was shocking. Not only is Alpha more brutal as a leader than anyone we've seen before, including Negan, the other Whisperers aren't a walk in the park either. In fact, Alpha's right hand man, Beta on The Walking Dead is maybe scarier, as we still haven't seen his face — and probably won't.

Alpha may be the leader of this group, and may be in charge of their philosophical viewpoint, but don't you kind of get the impression that Beta is the one driving the mask aspect of the Whisperer's whole deal? He takes way too much pleasure in carving the face skin off walkers, and never seems to take off his mask.

In the comics, Beta is basically the same. He's tall, rocks a trench coat, and serves as Alpha's bodyguard/enforcer. He doesn't take his mask off, and kills those who try — like a redneck Phantom of the Opera, if you will. However, there's a reason that Beta is so protective of his image in this post-apocalyptic landscape in the comics. Before the outbreak, Beta was an NBA basketball player turned actor. He's famous! The Walking Dead has never really had a character like that before. No wonder he doesn't want anyone to recognize him.

Sidenote: That's one detail from the comics that just has to make it into the AMC series — please! The Whisperers are so scary, and if a survivor recognized a freakin' celebrity in the bunch, that might bring some much needed levity.

He also, in the comics, really hates Negan, which should be interesting going forward if they ever meet in the series. Though, to be fair, the only people that Beta does seem to care about are Lydia and Alpha, and he really doesn't care who he kills and how he he does it. And boy oh boy, does he kill people in some wild ways.

Beta is played by Sons of Anarchy actor Ryan Hurst — so you have actually seen his face before, even though we're unlikely to on The Walking Dead. You may also remember him from Remember The Titans, Bates Motel, and Saving Private Ryan.

For now, the Whisperers are still just seemingly passing through, and As far as the Hilltop and Alexandria are concerned, they don't pose a threat now that Lydia has been returned to them. However, as Lydia herself quickly figured out, it's highly possible that the only reason Alpha went to the Hilltop to retrieve Lydia is because she could give the Whisperers information about their community and their resources. This group could be coming to attack, and soon.

In the comics, the Whisperers attack the fair at Alexandria by infiltrating it disguised as new members of various communities, and that's how the war begins. Now, Michonne's group won't be hosting the fair at Alexandria on the AMC series. That honor goes to the Kingdom, and honestly is a smart move. Logistically, they have more space... not to mention a projector.

However, everyone will be attending and it does seem like that's what this season is leading up to. When that happens, expect the worst from Beta. He may have a cool fashion sense and a funny background compared to the other Whisperers, but he's one of the most cold-blooded killers The Walking Dead has ever seen.