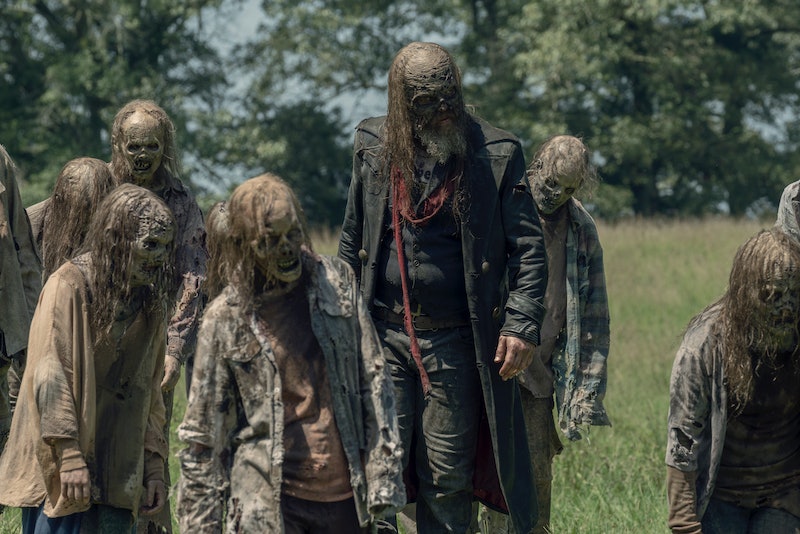 Spoilers ahead for The Walking Dead Season 10. The Whisperers aren't supposed to be sentimental, but the origin of Beta's mask on The Walking Dead proves that Alpha's second in command did care about people, once upon a time. As inhuman as these terrifying villains are trying to be, they, much like the other survivors, can't completely leave their pasts behind. Alpha has her daughter Lydia's stuffed rabbit and Beta has his mask.

"We Are The End Of The World" reveals how Alpha and her daughter first met Beta, seven years before the current timeline. The latter was holed up in an abandoned hospital, presumably all alone, and already obscuring his face with a ski mask. Later, it is revealed that the mask Beta wears in the present timeline once belonged to a man that he knew and loved — and skinned.

In a flashback at the hospital, Alpha finds a picture of her new friend standing with his arm around a man with long blonde hair. Both of their faces are scratched out in the photo, and Beta has drawn the smiley face from this man's tee-shirt all over the walls along with the word "end." While Alpha is alone in Beta's room, she's surprised by a walker — wearing that same shirt — and takes him out. Beta is furious as he kneels over the corpse, making it clear that this walker was important to Beta, maybe a brother or a friend, and that he'd been living with the zombie all this time.

"I can't leave him," Beta says to Alpha, hovering over the man's still, zombified body. She suggests that he doesn't have to and hands Beta a knife. In the present timeline, Beta wears that smiley face shirt and mask at all times.

Hiding his identity is more important to Beta than the rest of the Whisperers, as the ski mask that preceded the walker mask indicates. In a scene ripped right from The Phantom of the Opera, Beta is furious when Alpha tenderly tries to remove the ski mask, and demands that she leave his lair. What, or who, is he trying to cover up?

In the comics, Beta similarly refuses to take off his mask. His identity is only revealed when he is killed by Aaron and Jesus at the end of the Whisperer War. They instantly recognize that before the apocalypse, Beta was a famous pro basketball player who tried his hand at acting and starred in car commercials. The mask was keeping his celebrity secret.

Alpha briefly gets a look at Beta's true face in the episode, and smiles before pulling the ski mask back down. It seems like she might recognize him, so it's possible that Beta's secret from the comics could also be revealed in the AMC series.

But the mask he wears is the more interesting mystery at the moment. Who did that face belong to before the apocalypse, and could Beta ever bring himself to feel that way about anyone else again?

The little family that Beta has built with Alpha on The Walking Dead has been broken — first when Lydia abandoned them, and now with the rise of Gamma. Knowing now that Beta has feelings after all, this is definitely going to end badly.

More like this
The 50 Most Powerful Characters In The Marvel Universe, Ranked
By Johnny Brayson and Nola Pfau
What’s New On Netflix: Ana De Armas’ 'Blonde' & A Nick Kroll Special
By Arya Roshanian
What’s New On Netflix: Meet 'The Real Bling Ring'
By Arya Roshanian
Here’s Everything Coming To & Leaving Netflix In October
By Jake Viswanath
Get Even More From Bustle — Sign Up For The Newsletter