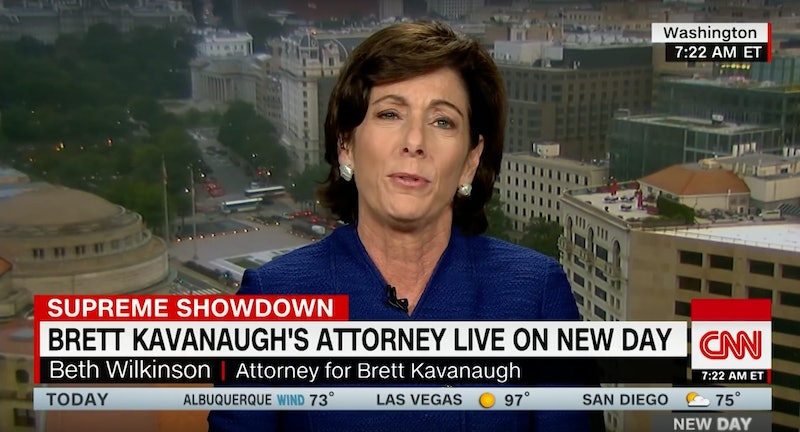 On Wednesday, Julie Swetnick became the third woman to accuse Supreme Court nominee Brett Kavanaugh of sexual misconduct, alleging that she saw him at parties in the 1980s where women were "targeted" and "gang raped." (Kavanaugh has vehemently denied the allegation.) In an interview with CNN later that day, Kavanaugh's lawyer Beth Wilkinson asked why Swetnick did not report those alleged behavior at parties, and said that she has a "very hard time" believing Swetnick's claims.

“Really, you witnessed gang rapes and you never came forward?” Wilkinson said. “I cannot imagine not coming forward when this man was named. If that’s what you witnessed. I don’t understand that.”

In a sworn testimony that she signed under penalty of perjury, Swetnick claims that she attended several parties in the early 1980s at which she witnessed Kavanaugh "targeting" and engaging in "inappropriate contact of a sexual nature" with female attendees there. She alleges that Kavanaugh and his friends tried to make the teen girls "inebriated and disoriented so they could then be 'gang raped'" by a "train of numerous boys." Swetnick alleges that she "became the victim of one of these 'gang' or 'train' rapes" where he was present. Kavanaugh has denied Swetnick's allegation in a statement, saying "This is ridiculous and from the Twilight Zone. I don’t know who this is and this never happened."

Wilkinson, who's worked on several controversial cases in the past, suggested that anybody who witnessed a "gang rape" would have reported it to authorities, and questioned why Swetnick would have attended multiple parties where this kind of behavior was allegedly occurring.

“When you say you went to 10 parties like that and you kept going to those parties even though that was happening,” Wilkinson said of Swetnick, “and you saw that supposedly happening to other girls — that is a different thing not to report."

Prior to Swetnick coming forward, two other women had accused Kavanaugh of sexual misconduct. Dr. Christine Blasey Ford said that Kavanaugh pinned her to a bed, groped her, attempted to take off her clothes and put his hand over her mouth when she tried to scream at a party when the two were teenagers. Deborah Ramirez says that Kavanaugh exposed himself to her at a different party in college. Kavanaugh denies those allegations as well.

Wilkinson insisted that "no one should criticize" women who "don’t report sexual assault." However, she then suggested that Swetnick's allegation of sexual assault isn't believable because she didn't report it at the time.

Wilkinson made her comments a day before Ford is set to testify in front of the Senate Judiciary Committee. Swetnick has said that she, too, is willing to testify; however, the committee hasn't called her to do so, and is planning to hold a vote on Kavanaugh the day after Ford testifies.

In suggesting that Swetnick's allegations shouldn't be believed because they were made years after the fact, Wilkinson is adopting the same line of argument President Trump used to cast doubt on Ford's accusation. On Friday, Trump wrote on Twitter that "if the attack on Dr. Ford was as bad as she says, charges would have been immediately filed with local Law Enforcement Authorities." He has since said that he thinks all of the allegations against Kavanaugh are false.