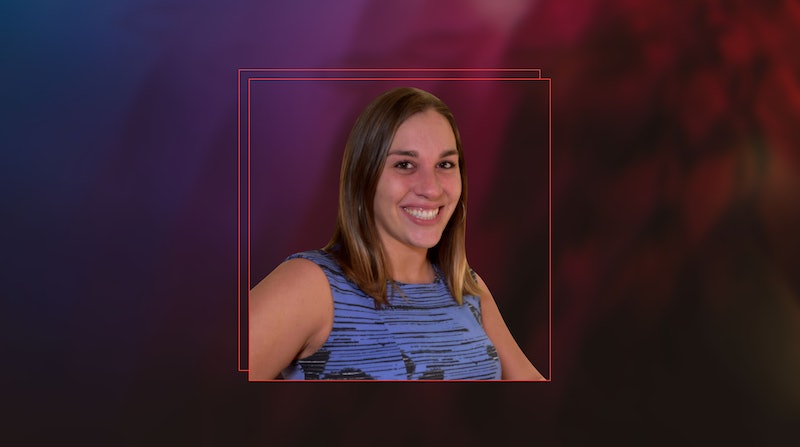 Margaret Flatley/Bustle
By Monica Busch
May 20, 2019

Bethany Hallam is bursting with energy. When she talks about the part of Pennsylvania where she grew up, and where Hallam is running for Allegheny County Council, she rattles off policy proposal after policy proposal. While she speaks easily about issues like air quality, criminal justice reform, and raising the minimum wage, the 29-year-old is not a typical candidate for public office. It's not her age that sets her apart, though. It's that she spent 10 years struggling with opioid use disorder, and isn't shying away from that backstory in her campaign.

UPDATE: On May 21, Bethany Hallam won her primary race against John DeFazio with 53% of the votes, likely making her the winner of the Allegheny County Council at-large seat general election, as well, since she is not expected to face a Republican challenger.

"I always talk about how lucky I am to have came out on the other side," Hallam tells Bustle. "But so many people that I've known — personally, or friends of friends, or just stories I've heard out the campaign trail — so many people have lost their lives to this."

Typically, when politicians discuss opioids, they do so in terms of statistics or policy proposals. Rarely do they discuss substance use disorder in terms of someone close to them. Only recently have members of Congress, like Sen. Tammy Baldwin (D-Wis.), for example, opened up about how opioids have impacted their own families. Referring to personal experiences with substance use disorder is still all but unheard of, as a mention of any kind of substance use can plague a candidate for decades to come.

While stigma surrounding opioid use disorder might scare some people away from running for office, Hallam has turned her struggle into a strength on the campaign trail.

"She doesn't shy away from it," says Allison Mathis, a school board member who met Hallam at the local Democratic committee. "I think that people can really relate to that. Because you know, whether or not you've personally struggled with addiction, everybody has faced some struggle in their lives. Nobody's perfect."

Hallam first began taking prescription opioids late in high school, after she suffered two back-to-back ACL injuries while playing lacrosse. During the two years she spent recovering from the knee injuries and managing her pain, she developed a dependency to the painkillers she was prescribed as part of her treatment.

"I didn't realize what was happening," Hallam says. "I just knew that everything I did in my whole life was sports. And all of a sudden, I lost a piece of my identity — as an athlete."

"In the life that I was living at the time, nobody ever tried to talk politics with me."

When the prescriptions ran out, she began buying opioids on the black market. Hallam went to college and managed to complete her degree, but her life was in chaos.

"It was a period where I was living in a car, where I was squatting in different friends' houses," she says. "There were a few months where I was sneaking into my own parents' house because they didn't want me there and I had nowhere to stay."

Hallam had several subsequent run-ins with law enforcement and pleaded guilty to a drug-related misdemeanor that landed her on probation and, eventually, in the Allegheny County Jail, where her body went into detox.

"For anyone who's ever experienced withdrawal from opioid — it is something I wouldn't wish upon my worst enemy," she says. "And it's a reason a lot of people go back to the drugs."

Two months later, she had a clear head. "And I think that was my wake-up call," she says. "Like, 'Hey, Bethany, you can do more with your life.'"

She credits her recovery after jail, in part, to a mentor named Jack Betkowski, a member of the local Democratic committee and a regular at a restaurant where Hallam worked before she was incarcerated. She describes him as her "second dad."

"In the life that I was living at the time, nobody ever tried to talk politics with me," Hallam says. "And [Betkowski] wanted to hear what I had to say."

Eventually, he even convinced Hallam to run for the local Democratic committee — which she did, successfully, while still struggling with opioid use disorder. Initially, Hallam hid her opioid use from Betkowski, but after a while she opened up to him about her problem. When she landed in jail a few months later, Betkowski wrote her letters every other day.

"A lot of people thank me for talking about it, for bringing it to light instead of hiding it and acting like it's some sort of scarlet letter."

"The first Women's March in Pittsburgh was held less than two weeks after I got out [of jail]," Hallam says. "And [Betkowski] took me there."

From there, Hallam describes throwing herself into politics wholeheartedly, and using the spot she already had on the local Democratic committee to help effect change. "I just took all that energy that I was using to support my addiction for all those years, and gave it 110%," she says.

Her political momentum continued to grow. A year later, Hallam was elected to the Pennsylvania state Democratic committee. She began volunteering for local campaigns, knocking on doors, and getting to know voters. All of this eventually led to her current bid for Allegheny County Council, in which she's facing off against the current county council president, 20-year incumbent John DeFazio. The primary is on Tuesday, and because of the way that the council elections work, the primary vote will basically decide the race.

Although DeFazio is a longtime union leader, Hallam is fashioning herself as the more progressive candidate. She says she believes she can be a pro-labor Democrat while also fighting against problems like pollution and climate change.

"We need to stop being so stuck in our ways and realize that we can be pro-environment and pro-job at the same time," Hallam says, adding that "people in lower income communities, especially people of color, keep getting left out of the conversation."

As Hallam prepares for the primary, she's mindful of the impact that her decision to run for public office might have on others. She considers herself fortunate to have survived opioid use disorder, and says she hopes to set an example for others who may be struggling the way that she has.

"A lot of people thank me for talking about it, for bringing it to light instead of hiding it and acting like it's some sort of scarlet letter. Just being able to talk about my past, I hope to inspire people to keep fighting the battle, and [show] that they can do anything they want."