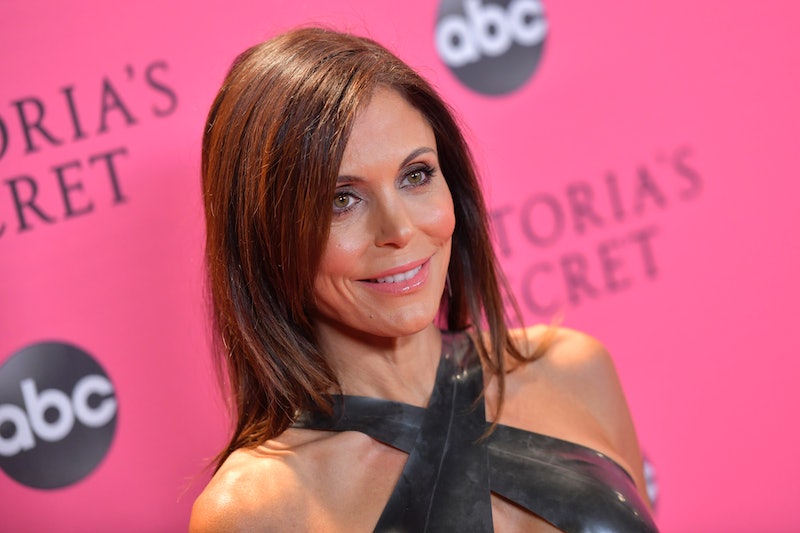 Days after Bethenny Frankel shocked Real Housewives of New York fans with news that she was leaving the series, the former reality star took to Twitter on Aug. 23 with another surprise for her followers. Bethenny Frankel said she left RHONY because she's married and, yes, it has left Bravo fans sufficiently confused.

Shortly after she announced her departure from the Bravo series on Instagram, Bethenny further explained her decision to leave the show in a short and sweet statement on Twitter. In her message, she sent well wishes to her former cast mates and current Housewives, Ramona Singer, Luann de Lesseps, Tinsley Mortimer, Sonja Morgan, and Dorinda Medley. She went on to explain why she left RHONY. Although, it may have left fans more confused than they were in the first place. She wrote,

"To my NY hwives: GO GET EM! I had to go since I’m the only one that is actually married...that’s how crazy this ride is. You are all amazing, beautiful and strong. Spread your wings and fly! Xoxo"

Bethenny's tweet left some wondering if she had tied the knot with her boyfriend, Paul Bernon, whom she has been dating since October 2018. However, as Us Weekly reported, the former Real Housewife has not secretly wed her beau.

Fans still questioned the phrasing of Bethenny's tweet, though, with many urging her to "mention it all" in order to clarify the situation.

On her Instagram Story on Aug. 23, Bethenny did indeed clarify her tweet, telling her followers that she did not secretly get married to her boyfriend. Instead, she stressed that she is still legally married to her ex, Jason Hoppy, whom she split from in December 2012, per People.

In her Story, Bethenny once again sent a positive message to her former co-stars, saying that she wanted to send some good vibes their way since they have been a big part of her life throughout her time on RHONY. She then went on to explain, "Ironically, I'm the only legally married housewife on New York, like I said at the reunion and I'm not newly married, I am just the only, was the only legally married housewife on the Real Housewives of New York."

As she went on to say, you can rest assured that if she did have any happy news to share, that she would definitely let her fans in on the update, "So, I am so appreciative and believe me, when there is something to tell you, I will tell you because you've been there for me and helped me through so many things as I said the other day and I really do love you."

Bethenny previously announced her decision to leave the Housewives franchise behind her on Aug. 21. On Instagram, she posted a throwback shot of her time on the series along with a lengthy statement about her time on the show. She wrote, in part, "Thank you so much for your love and support. And stay tuned, you haven’t seen the last of me. There are many amazing things to come. I love you all and am so lucky to have you in my life! PS: New York City is still my playground."

Thankfully, Bethenny clarified her recent tweet about leaving RHONY. Even though she did clear things up and let everyone know that this isn't the last you've seen of her, it's still evident that her departure from the Bravo staple is going to hit many fans hard.