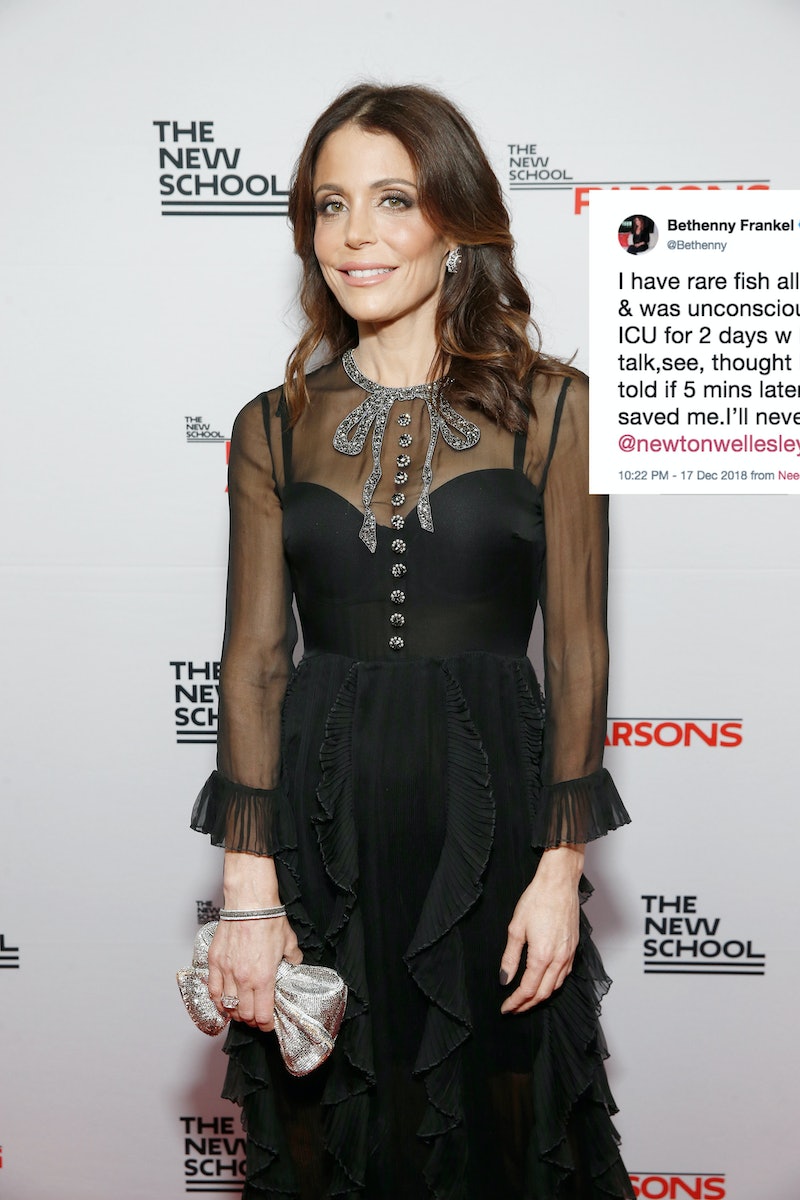 If you thought the Real Housewives of New York City on-screen drama was scary, think again. Real life can be far more frightening. Recently Bethenny Frankel was hospitalized after an allergic reaction, and the RHONY star shared all the updates with her Twitter followers on Monday night. Luckily, it sounds like she's doing OK now.

Kicking off the series of tweets, the Skinnygirl founder wrote,

In a later tweet, she clarified that her allergy is to non-shellfish. As frightening as the incident was, something good did come out of it. Bethenny told one of her followers, "I am making changes in my life. It was a wake up call."

Aside from vowing to have an EpiPen with her at all times, Bethenny agreed with a Twitter follower who told her to wear a medical ID bracelet. In addition to making some changes in her own life, the reality star is now motivated to help other people who suffer from similar allergies.

One of Bethenny's followers suggested getting EpiPens to schools and children's organizations. Being the philanthropist that she is, Bethenny loved that idea and promised to help.

Bethenny wants to get EpiPens to those in need, but she also wants to improve the comfort of others at the Newton-Wellesley Hospital. Her next mission is to get new mattresses for the patients. On top of that, she also posted about getting new linens for their patients.

Even though Bethenny wants to do what she can to improve the conditions at the hospital, she's not dissing the facility by any means. In fact, Bethenny tweeted that Newton-Wellesley Hospital is "the best hospital" that she has ever been to.

Of course, Bethenny is grateful for the treatment she received at the hospital, but she's also thankful for one person in particular. In response to a follower who mentioned her new boyfriend, Bethenny revealed that he actually saved her life.

Who is this guy? According to a September People article, Bethenny has been dating Paul Bernon, a real estate developer and film producer who lives in the Boston area. As of this moment, she has not confirmed his identity, but no matter who she's actually dating, the man is definitely coming through for her.

In a Dec. 18 People article, a source claimed that the Real Housewife of New York City star "almost died" from the aforementioned incident. This same person told the outlet, "Her blood pressure was through the roof and she was unconscious. She went into anaphylactic shock. Her boyfriend saved her life."

Thankfully, Bethenny is safe and sound after the hospitalization. Now, she's motivated to improve the comfort of hospital patients and to prevent others from going through the same ordeal. She turned a traumatic experience into something positive, once again using her very public platform to make a difference.