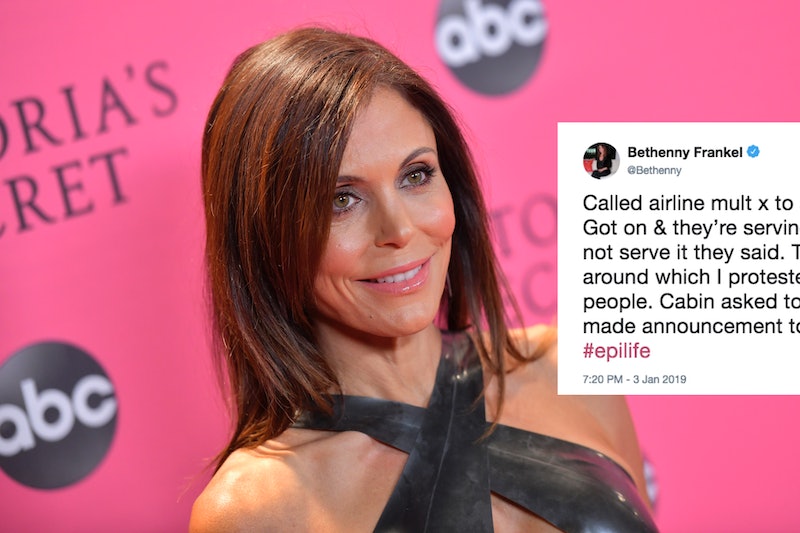 You can always count on the Real Housewives to be open and honest with their fans. One of the Bravo stars did just that recently. According to E! News, Bethenny Frankel's fish allergy almost caused her flight to be turned around recently, and she shared the whole experience on Twitter. And this isn't the first time that she's opened up online about her severe allergy.

On Thursday, Jan. 3, Bethenny took to Twitter to recount her flight ordeal. She claimed she called the airline multiple times before her flight to let them know about her allergy to fish. But, once she got on the plane, she found that they were serving bass to her fellow passengers. Because of the nature of her allergy, she could have had a reaction to fish if was being cooked in the same environment she was (which was the case here, based on a subsequent tweet of hers).

In her tweet, she went on to say that the pilot, who singled her out to the rest of the plane, wanted to turn around, even though she "protested" that. Ultimately, the plane did not turn around because the cabin voted not to, according to the Real Housewives of New York star. She initially wrote:

"Called airline mult x to say I have fish allergy. Got on & they’re serving bass. They couldn’t not serve it they said. Then they were turning around which I protested bc it would delay people. Cabin asked to not serve it & pilot made announcement to plane. That was fun. #epilife"

When people started to question the reality star about the situation, Bethenny decided to educate people about just how dire it is if she is in an environment with fish. She tweeted,

After this situation, Bethenny said that she'll remain focused on changing policies regarding food services for every airline — without identifying where exactly this particular situation took place. She wrote, "This airline knows who they are. And this policy will change if it is all I focus on. I almost screwed everyone’s night up too, which the pilot delightfully announced."

Bethenny's unfortunate airplane situation follows another ordeal that the reality star dealt with, which also stemmed from her fish allergy. She revealed on Twitter that she ingested soup which happened to contain fish (something she was, obviously, not aware of) She wrote on Dec. 17:

An article from People also detailed the situation, in which a source credited Bethenny's new boyfriend, Paul Bernon, for saving her life. They claimed, "Her blood pressure was through the roof and she was unconscious. She went into anaphylactic shock. Her boyfriend saved her life."

Thankfully, Bethenny appears to be doing well after these two ordeals, as her Twitter engagement would imply. And based on some of those tweets, in which she vowed to change how the world views and handles food allergies, she's going to do her best to help make sure situations like these don't happen ever again.