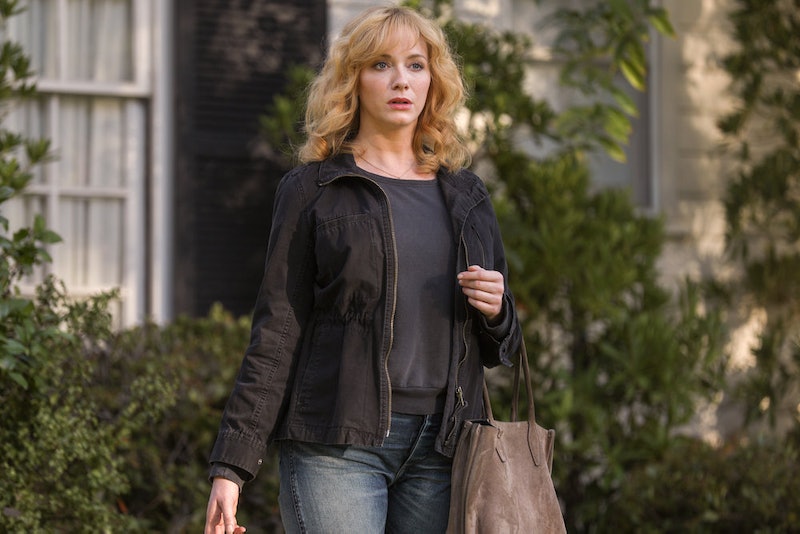 Spoilers ahead for Good Girls Season 3, Episode 3. With Rio ready to kill her on Good Girls, Beth did the one thing she could think to do to buy herself some time: she told him she was pregnant. It worked...for the time being. But it's a lie that she can only keep up for so long. She's not actually pregnant, and it doesn't seem like she will be any time soon.

After lying to Rio, Beth tried to conceive a baby with her husband Dean. But weeks of trying led to nothing, and he eventually figured out what she was doing. He insisted that he didn't want another child, nor did he want to just be a "sperm bank." So that option is seemingly out the window. It's also unlikely that Rio will ever sleep with Beth again; her trying to kill him crossed a line they can't really come back from.

"There will always be [some chemistry] there naturally, but I don't ever think they should act on it again," Good Girls star Manny Montana, who plays Rio, previously told Bustle. "I feel like it would make Rio very weak, because this woman shot him three times."

Unless Beth contacts an actual sperm bank, she's in a lot of trouble. And even if she does get pregnant, it won't be Rio's kid. He said during Episode 3 that he wanted a paternity test, and he will likely follow through on that. Plus, he's going to get even more suspicious as time goes on and Beth doesn't start to show. As Rio's son's mother told Beth, "He's not dumb."

That said, Beth may have another out if she can convince Rio that she's a necessary part of keeping his business going. She stopped making counterfeit money after finding out that Rio was alive, but the synopsis for the next episode (airing March 8) suggests that she gets back into the game. "Beth takes a gamble in order to strike a new business deal, but it has consequences that put the women in an unwelcome position," it reads. Many of the episode photos hint that the "gamble" she takes is getting back into business with Rio. He's pictured watching her counterfeiting process.

It's hard to envision the two working together again given all that's happened, but Rio may be open to it if he sees Beth as his most profitable opportunity. "I think Rio's motivation is his son," Montana told Bustle. "Now [that] his son's getting older, he realizes that he wants to get out of this life [of crime]. So to me, the motivation has always been, 'Make as much money as you can and then get the hell out.'"

Beth better hope her criminal savvy is enough to get back into Rio's good graces, because once he realizes she's not pregnant, it doesn't seem like she really has another viable plan.