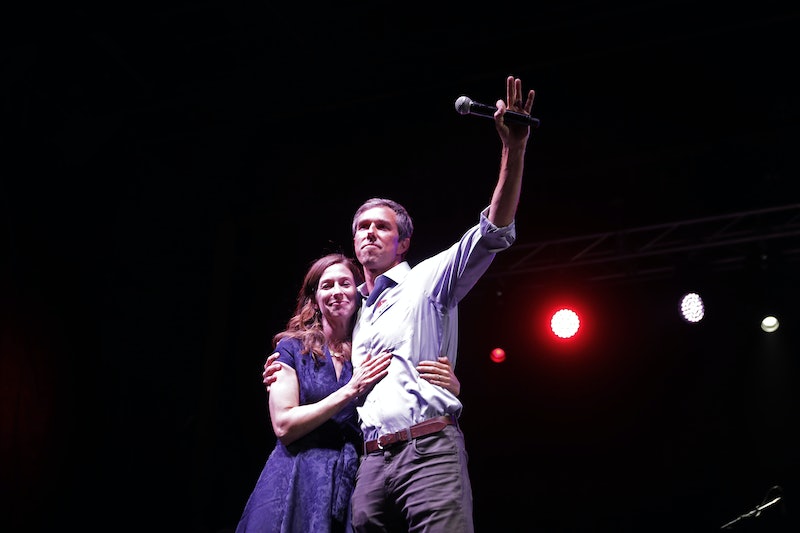 After officially announcing his presidential bid Thursday morning, the former Texas congressman stopped into a coffee shop in Iowa, where he spoke to voters about how he plans to run his campaign. When The Washington Post's Matt Viser reported from Iowa that Beto O’Rourke said he “sometimes” looks after his kids, women on Twitter weren't laughing. In fact, many pointed to a stark double standard for men and women running for public office while raising young kids.

O’Rourke told the coffee shop crowd that he had just talked with his wife, Amy, who "is raising, sometimes with my help” their three kids, according to Viser. O’Rourke then added that he’s running for president for his kids and everyone else's.

These comments came not long after the former congressman released a video formally throwing his hat in the ring for the 2020 presidential race. He declared that "this is a defining moment of truth for this country and for every single one of us" and promised to run a "positive campaign" that seeks to unite the country.

But O’Rourke entered an already crowded field of Democratic presidential hopefuls that includes a record-breaking number of women — and women on Twitter argued that female candidates would have gotten a lot more backlash for saying they "sometimes" help raise their kids.

New York magazine's Rebecca Traister pointed out that O’Rourke seemed to be acknowledging that his wife was doing the majority of the work needed to raise three young kids while he campaigned and went on a nationwide tour. But she noted that a woman running for president could never make a similar joke about "sometimes" helping with parental duties.

Sens. Amy Klobuchar (Minnesota), Elizabeth Warren (Massachusetts), Kamala Harris (California), and Kirsten Gillibrand (New York) — along with Rep. Tulsi Gabbard (Hawaii) and spiritual teacher Marianne Williamson — have all entered the Democratic primary race. The reactions to O'Rourke's comment made it clear that many women voters believe any of the women bidding for the White House would have a hard time running a viable campaign if they talked about parenthood the way O’Rourke did on Thursday.

The O’Rourkes' children are ages 8, 10, and 12. In Vanity Fair's recent profile of the presidential hopeful from Texas, the youngest O’Rourke, Henry, said, "Dad, if you run for president, I’m going to cry all day."

“Just the one day?” O’Rourke asked his son.

People on Twitter were also critical of O’Rourke for saying he was "just born" to run for president when he kids clearly weren't on board. But overall, the criticism was centered around the fact that, as a man, O’Rourke will get more passes when it comes to his family life than will his female opponents. Gillibrand has two sons, ages 10 and 16, and she's made a point to highlight her role as mother on the campaign trail.

More like this
Watch Jacinda Arden’s Devastatingly Honest Resignation Speech
By Sam Ramsden
What The UK Blocking Scotland’s Gender Recognition Bill Means
By Sam Ramsden
Twitter Is Identifying With Sally Field & Jane Fonda’s Friendship In New Viral Video
By Jake Viswanath
24 History-Making Black Women You Probably Didn't Learn About In School
By Ayana Lage and JR Thorpe
Get Even More From Bustle — Sign Up For The Newsletter
From hair trends to relationship advice, our daily newsletter has everything you need to sound like a person who’s on TikTok, even if you aren’t.